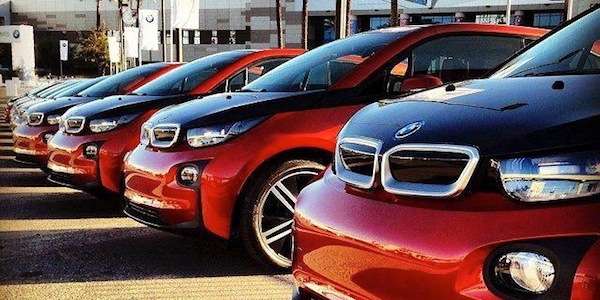 One year after its launch, the new BMW i3 has picked up more awards than any other EV. The BMW i3 just received number 19 in Los Angeles.
Advertisement

BMW i3 is already the third best-selling all-electric automobile on the market and its making quite a statement in the automotive community. The new BMW i3 has just received the Green Car of the Year Award 2015 and adds another trophy to an impressive list of honors in its first year on the market. This latest award was presented to BMW by Green Car Journal at the Los Angeles Auto Show 2014.

BMW i3 is the first dedicated all-electric vehicle in the premium segment and the sporty vehicle has now picked up a total of 19 global awards over the past months. BMW has sold more than 12,000 i3’s now since its launch in November 2013. The all-electric premium car points to a successful mating of zero tailpipe emissions with premium-class driving in urban environments around the globe.

The i3’s list of awards is impressive and started before its market launch and continues on to this latest award. BMW i3 won the Green Steering Wheel 2013 award during the pre-launch in Germany. Next it was voted best car in its class in auto, motor und sport’s Best Cars 2014 awards. It also won two readers’ awards from Auto Zeitung magazine, plus the Auto Trophy 2013 and the Green Mobility Trophy 2014.

Other global awards for i3

BMW i3’s also received accolades for its exterior and interior designs. This past year it received the German Design Award, the iF gold product design award and the Automotive Interiors Expo Award. In France, i3 picked up the French edition of GQ magazine named BMW i Head of Design Benoit Jacob “Designer of the Year”. In further tributes, Auto Bild voted the BMW i3 Design Innovation of the Year, and readers of Auto Bild Klassik named it Classic of the Future

The latest Green Car of the Year Award 2015 honor was presented at the Los Angeles Auto Show 2014. The Green Car Journal says the i3’s newest award was based on the BMW i3’s zero emissions at the point of use, its innovative lightweight design and the high percentage of sustainably produced materials used in its manufacture. The Green Car Journal has been hosting the Green Car of the Year Award annually at the LA Auto Show since 2005. They are a publication that specializes in reporting on sustainable, efficiency-enhancing technologies and pioneering trends in the automotive industry.

The new BMW i3 has just celebrated its first birthday this month and already has 19 awards in the trophy case. The first dedicated all-electric vehicle in the premium segment will likely see 16,000 total sales by the end of this year and has been a success for the German automaker. The latest Green Car of the Year award gives the i3 another trophy to add to the long list of honors.