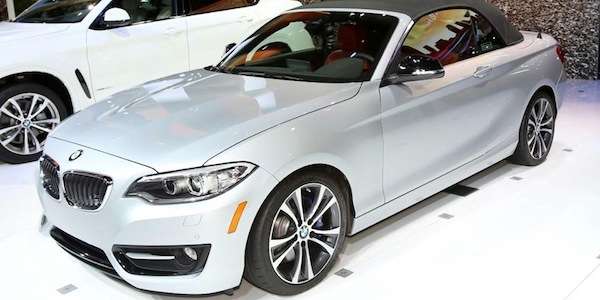 Optional colors for the top include Anthracite or Brown with silver effect. BMW says the top can be opened in 20 seconds at the touch of a button and at speeds of up to 30 mph. And the trunk is roomy enough to store two 46-inch golf bags or a pair of snowboards for sports enthusiasts.

DONT MISS: Why new 2015 BMW 2 Series will make you a true believer

The new 2015 BMW 2 Series convertible that replaces the BMW 1 Series convertible is longer, wider, faster and more economical than its predecessor. The 2015 M235i and 228i as well as the 228i xDrive, featuring BMW’s intelligent all-wheel drive system, will arrive in U.S. showrooms in early 2015. Build your own 2015 2 Series Convertible here.