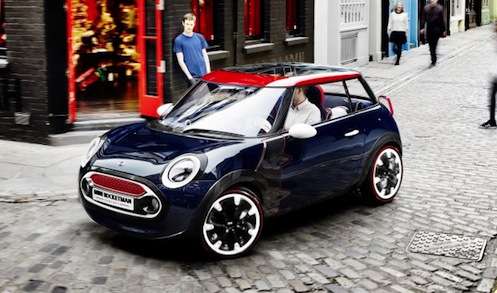 BMW is rolling out and updated version of the MINI Rocketman Concept for the world to see at the 2012 Olympic games in London.
Advertisement

When the MINI Rocketman Concept was unveiled for the world to see at the 2011 Geneva Motor Show, it created quite a stir with its small stature and tight turning radius. BMW is renewing the focus on the tiny car as they will introduce an updated version of the concept car at the 2012 summer Olympics in London. That renewed focus comes at a time when the global auto community is ready for a fuel-efficient premium car with conventional technology.

With the general public still slow to embrace electric cars, carmakers are looking for ways to offer fuel-efficient cars with conventional technology. The MINI Rocketman Concept will compete with the new electrics and plug-in hybrids that have been coming onto the scene recently. So it’s no surprise that BMW is using the world stage to draw attention to its small but fuel-efficient concept car.

The MINI Rocketman Concept is small but fun

The ground-breaking new concept car from MINI offers the driving fun we have come to expect from the German carmaker, but offers it in a small package. The Rocketman Concept has an overall exterior length of just over three meters and it will turn in extremely tight spaces. The small car is considered a 3+1-seater, with its three doors. Even though it comes in a small package, the little car still offers the same timeless core values that the brand has been known for. It produces the same “smile-inducing agility” while offering exceptional efficiency.

Somehow MINI was able to take the smaller dimensions and still design a car that maximizes the interior space. While you wouldn’t want to take the MINI Rocketman Concept on a long road trip, the interior features three full-size seats and an extra seat suitable for short journeys.

The construction is lightweight

The MINI Rocketman Concept utilizes a lightweight spaceframe that is made from carbon fiber reinforced plastic, ensuring it remains light and strong. BMW has been an innovator in carbon-fiber technology and is developing a new low-cost manufacturing process. Look for more of their cars to have this weight-reducing material in the future.

One unique special feature on the little MINI is the distinctive lighting system for the roof. The concept car has a full-surface glass roof, whose illuminated braces recreate the look of Britain’s Union Jack flag. The horizontal braces continue to shine in bright Porcelain White even when the roof is not illuminated. At night, the integrated optical fibres provide a pleasant indirect illumination of the interior and a compelling night design that is visible from the outside. On this latest version of the MINI Rocketman Concept, the roof’s transparent surfaces are bordered by a metallic red painted strip.

We don’t know yet will power the updated MINI Rocketman Concept, but BMW will likely use a version of its new-generation three-cylinder engine that is being developed for the brands other models. Look for the little car at the summer games in London starting next month.