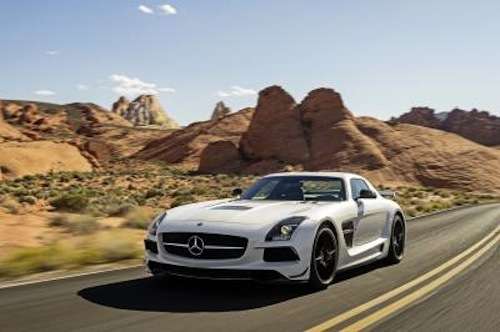 The all-new 2014 Mercedes-Benz SLS AMG Black Series makes its world premiere in LA and pricing has been announced on the high-end version of the legendary gullwing model.
Advertisement

Inspired by the SLS AMG GT3

The fifth Black Series model from Mercedes-AMG, inspired by the racing version of the SLS AMG GT3, is the fastest version to date. The performance supercar is lightweight, powerful and the breathtaking design is sure to excite anyone who views the car at the show this year.

The 2014 Mercedes-Benz SLS AMG Black Series is lightweight and has a curb weight of 3,417 pounds. The supercar achieves a power/weight ratio of 5.49 lb/hp. The hand-built AMG 6.3-liter V8 engine generates enough power to break your neck with an output of 622 horsepower and 468 lb-ft of torque. The AMG Black Series accelerates from 0-60 mph in a neck-snapping 3.5 seconds and a top speed of 196 mph. The car that just made its world premiere is the fastest SLS of all time.

Those who attend the LA Auto Show this year will also see the functional, sporty racing car atmosphere inside the SLS AMG Coupe Black Series. It features the Mercedes-Benz precision workmanship that the brand is known for with high-quality materials and exquisitely designed details. The fifth Black Series model includes an extensive use of carbon fiber like that found in the world of motorsport.

Mercedes has developed the most extreme version of the SLS model ever built and it's finally been unveiled for the world to see. It has been developed by the AMG team and boasts the best technology and engineering the performance brand has offered to date. They have taken the best from motorsport and transferred it to the road. Ola Källenius, Chairman of Mercedes-AMG GmbH says, “Our fifth Black Series model guarantees pure, unadulterated 'driving performance.' The SLS AMG Black Series is the ultimate choice for fast laps and a highly emotional experience."

We can be sure that those who see the SLS AMG Black Series at the LA Auto Show this year will get excited. For those who get a chance to get behind the wheel of the supercar and actually drive it, they will experience a whole new level of emotion. Mercedes says the market launch of the 2014 Mercedes-Benz SLS AMG Coupe Black Series will commence in June 2013. The price in Germany will be 249,900 euros, $324,795 U.S.