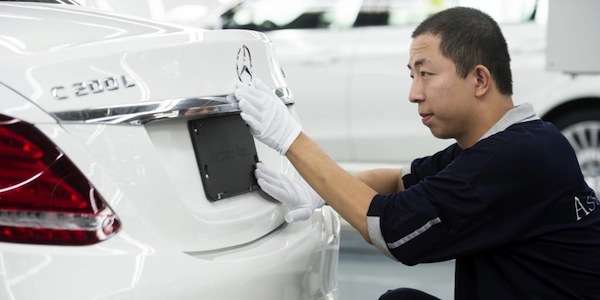 The first ever long-wheelbase version of the 2015 C-Class for the China market marks another key milestone for Mercedes-Benz’ global strategy.
Advertisement

The new C 200 L C-Class just rolled off the production line at Beijing Benz Automotive Co., Ltd. (BBAC) in China. The model, which will be launched in China starting this September, is an important addition to Mercedes-Benz’ portfolio and marks another key milestone in Daimler’s China and global strategy. The U.S. is the biggest market for the C-Class, but China is emerging as a top market for Mercedes and the new C-Class sedan.

China market will be big for the new C 200 L

Hubertus Troska, member of the Board of Management of Daimler AG responsible for China says China has already become the second-largest market for the C-Class. “Now we are taking the next step: designed and developed for China, produced exclusively in China, our all-new long-wheelbase C-Class is destined to become one of our top growth drivers here.”

The new 2015 Mercedes-Benz C-Class will be the brands most global car in their lineup. Frank Deiss, President and CEO of BBAC: “Given its production in four plants on four continents, the C-Class sedan is our most global model.”

The new C 200 L that is being produced in China comes with a wheelbase that is an extra 8 centimeters long. The long-wheelbase version of the 2015 C-Class offers its passengers maximized backseat legroom. Rear passengers even have the ability to adjust the front row passenger seat for even more rear legroom if they need it.

The new 2015 C-Class will come with more advanced technology and a full range of assistant systems including a semi-autonomous driving pilot and an innovative touchpad. This new feature will allow for operations of the head unit functions through Chinese handwriting. Mercedes says the new long-wheelbase C-Class also offers maximum safety and the latest in technology in its segment. The engines powering the new C-Class are locally produced at BBAC in Beijing as well at Mercedes-Benz’ first ever passenger car engine plant outside of Germany.

Mercedes introduces this unique first-ever 2015 Mercedes C-Class in China. The Chinese market will not only get a first-ever long-wheelbase version of the 2015 Mercedes-Benz C-Class, but they will also produce the new C 200 L.