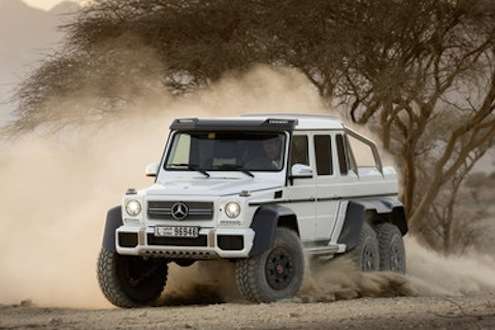 The new Mercedes-Benz G63 AMG 6X6 is the world’s last word in off-road power to take its owner and passengers anywhere on the planet, in luxury.
Advertisement

When we first brought the story of the new Mercedes-Benz G63 AMG 6X6 two weeks ago, we focused on its off-road prowess. But we didn’t quite have all the information on the incredible vehicle from Mercedes. The German automaker and their AMG division have released more information on what makes this massive beast so special. It does have a 544 horsepower AMG V8 powerplant, a 6X6 drive, an ultra-low-range, five differential locks, portal axles, tire pressure control system and a special chassis built to go anywhere on the planet. And where most other vehicles would have bitten the dust, this MUV (Monster Utility Vehicle) will keep on going.

But you have to remember that this vehicle is built my Mercedes-Benz. It’s also influenced greatly by AMG who knows how to not only build high-performance engines, but they also offer interior enhancements to their stable of automobiles. So the new G63 AMG 6X6 features everything that Mercedes and AMG can bring to the table. The owner and its occupants will be offered the highest possible degree of comfort, even when negotiating the worst that the combined forces of topography and meteorology can throw at them. This MUV is a high-end luxury vehicle that will spoil the very rich and famous.

The best of three worlds

With a sticker price of 350,000 euros ($457,000), the huge G63 AMG 6X6 is the second most expensive vehicle Mercedes offers behind the new SLS Electric Drive. Mercedes says the new G63 AMG 6X6 is worth every penny and brings together the best of three worlds. Of course it will offer superior off-road capabilities that no other vehicle can. It also features a new interior concept with new instrumentation. Last but not least, it features the renowned AMG engine technology and a luxurious interior that is second to none.

The G63 AMG 6X6 will go anywhere a vehicle with tracks or a mountain goat would dare to venture. It features six driven wheels, an off-road low-range ratio in the transfer case, portal axles, five differential locks which can be engaged on the move and a tire-pressure control system which allows the pressure in the huge 37-inch tires to be adjusted in record time while the vehicle is running. It is the ultimate off-road, extreme terrain vehicle. It gets the best of the G-Class series-production models refinement and more.

The interior of the new G63 AMG 6X6 is not sparse and something you would expect to see in a Dakar-Rally-style vehicle. The cabin features the most updated equipment of any Mercedes-Benz vehicle. It features an up-to-date interior concept with the contemporary dashboard featuring impressive new instruments and a large, central color display. It is practical and yet it's ready to take on the toughest terrain the planet has to offer. But it lets the driver and occupants do it in style.

Mercedes has finished the new G63 AMG 6X6 interior and given it the renowned Mercedes-AMG luxury. The big MUV gets the superior AMG engine technology and an interior which is as luxurious as it is comfortable. The driver and passengers are welcomed aboard with “an exclusive ambience” of classic red or light brown designo leather with contrasting top stitching and attractive diamond-pattern quilting.

It also features four heated and ventilated individual seats that can be electrically adjusted for a comfortable ride. The rear compartment is equipped with a special center console while the roof liner and pillars are finished in an Alcantara covering. The rear panel is also trimmed in leather. The exclusive touches even extend to the load area which is finished in solid bamboo.

So when will the new Mercedes-Benz G63 AMG 6X6 enter production? Mercedes says the response to the two show vehicles will determine if and when the MUV enters a small-series production. When they do, Mercedes only plans on producing around 20-30 examples when it rolls out later this year.