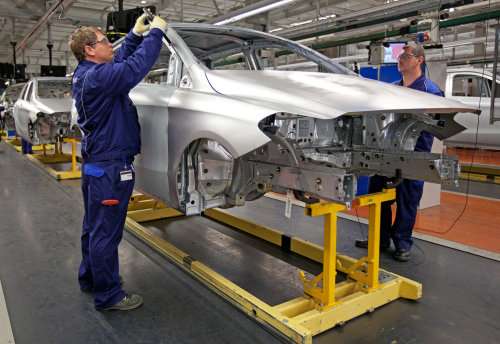 Countless spy photos ensured that it was coming, and now Mercedes-Benz has confirmed the production of a new small four-door coupe.
Advertisement

It has been known for some time that Mercedes-Benz was planning on bringing out a new small four-door coupe, but they let it slip out yesterday. At the opening of their new plant in Kecskemét Hungary, where the company currently produces the B-Class hatchback, Daimler CEO Dieter Zetsche let it slip yesterday that the new four-door coupe is coming.

Spy shots of prototypes have been in existance for nearly a year and have fueled rumors as to when the four-door coupe would begin production. Now Mercedes has confirmed it will be produced in Kecskemét, along side the car that is shares its platform with, the Mercedes-Benz B-Class.

The plant in Hungary is the companies first plant in Eastern Europe and was built at a cost of $1.06 billion. At the opening ceremonies, Hungarian Prime Minister Viktor Orban, Dieter Zetsche, CEO of Mercedes’ parent company Daimler AG, and plant director Frank Klein launched the assembly line for the company’s B-Class cars.

Daimler CEO Dieter Zetsche talked about the importance of the new location, stating, “With the start of production in Kecskemét, the Mercedes-Benz offensive in the premium compact segment is shifting up a gear. With the production network of the Rastatt and Kecskemét plants, we now have the capacity to meet the demand from many existing, and new customers in the premium compact segment.”

Mercedes is expected to produce 120,000 cars a year at the new plant. The new four-door coupe will share the same platform as the new B-Class and the name has not been confirmed yet but will either carry the CLA name or the existing CLC Class badge.

The new model will feature a front-wheel-drive configuration that it shares with the B-Class, and Mercedes-Benz 4Matic may appear in the high end models. Powertrains are said to include a 1.6 litre turbo gasoline engine and a 1.8 litre turbodiesel, and will be paired with either a seven-speed twin-clutch automatic, or a conventional six-speed manual.

An AMG variant is rumored to be in the works as well, and is expected to feature a 240kW 2.0-liter twin-turbo four cylinder engine. This new four-door coupe is expected to make its world debut in concept form next week at the 2012 New York Auto Show.