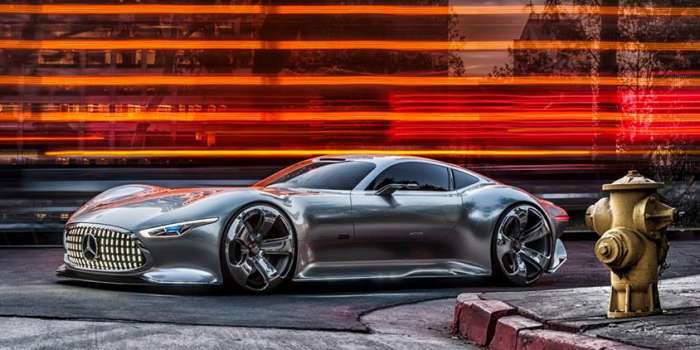 The Mercedes-AMG Vision Gran Turismo will be going into production with five cars being produced worldwide.
Advertisement

The gorgeous Mercedes-AMG Vision Gran Turismo that was unveiled at the Los Angeles Auto Show 2013 will make it to production. Do you have 1.5 million? That’s what JamesEdition will charge for the ultra-exclusive Mercedes-AMG Vision Gran Turismo they will be offering buyers. They will only build five models worldwide and they will each cost $1.5 million U.S.

JamesEdition says that the concept model Mercedes brought to the show "created such an incredible buzz," they decide to build five exclusive production cars. They will use the 2014 SLS AM GT as the base car, and from there will be making the whole body out of carbon fiber reducing the weight by over 200 lbs. The exterior will feature a unique custom chrome paint finish.

The car won’t just be in the virtual world of gaming. The car was created in the minds of Mercedes-Benz designers, but five wealthy individuals will get to own the incredible supercar. The car will come with a retractible rear spoiler, and a bespoke exhaust system that will likely sound amazing. The AMG Vision Gran Turismo will be powered by a 6.3-liter V8 powerplant that comes in the SLS AMG GT.

This car will even faster than the SLS AMG GT that produces 591 horsepower. With the car being ultra-light weight, it will be incredibly fast. All that power will be transferred to the rear wheels via a AMG DCT Speedshift seven-speed sports transmission. The wheels will be custom forged by world famous wheel designer ADV.1 The interior will be modified to the customers specific color request.

The Mercedes team who designed the Mercedes-Benz AMG Vision Gran Turismo didn’t have much time from start to finish. But it was more than just a gaming car on the drawing board. They had to build a real model that had to be ready for the LA Auto Show. Now we’ll see five production examples for sale worldwide.

The five production supercars will be available through JamesEdition AB who is located in Stockholm Sweden with showrooms in London, Frankfurt, Singapore and Boston. The high-end luxury dealer says one of the five cars is already under contract. Two will be available in the middle east, two in Europe, and the final car will be sold in the U.S.

What we thought would only be driven in the virtual world, is now being offered in the real world. Would you like to own one of the four remaining Mercedes-AMG Vision Gran Turismo’s? It only takes $1.5 million U.S. and it could be yours.

What inspired the design of the Mercedes-Benz AMG Vision Gran Turismo? For the answer, watch some of the designers who made it happen in the video below.