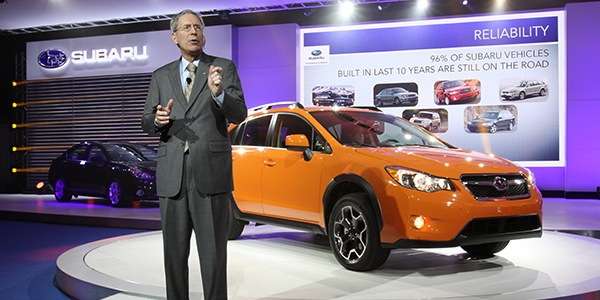 Meet the man who turned Subaru into a high-demand commodity

Subaru’s Tom Doll is named Motor Trend 2016 “Person of the Year.” What did Doll do to turn Subaru vehicles like the Outback into a high-demand commodity?
Advertisement

Most people know Subaru for their new 2016 Outback wagon, their customers know them for the way they make them feel loved. It sounds quirky but Subaru knows how to connect with their customers to keep them coming back to buy their vehicles. The Japanese automaker is also attracting new customers to the brand at a 60 percent clip, and Subaru of America is headed for their seventh consecutive year of record sales in the U.S. Who is responsible for this tremendous growth?

It’s Tom Doll, Subaru’s COO for Subaru of America and he’s been named Motor Trend 2016 “Person of the Year.” It’s a high honor and well-deserved for Doll and Subaru. The brand that is in high demand, now outsells brands like BMW, Volkswagen, Mazda, and Buick in the U.S. Motor Trend says, “Doll helped the once quirky brand go mainstream by making Subaru a lifestyle choice instead of merely a vehicle to purchase.”

Tom Doll has been responsible for creating Subaru's brand identity that resonates with consumers that goes far beyond the dealer showroom and their automobiles. Doll recently told Bloomberg that sales took off when they “stopped acting like a car company.” This is when the automaker who specializes in all-wheel-drive vehicles started the “Love“ campaign sales ads. Subaru’s customers love their all-wheel-drive vehicles.

Doll has been the driving force to turn Subaru into a growing and profitable automaker here in the U.S. More than 60 percent of Fuji Heavy Industries (FHI) revenue and profit originates in North America, where vehicle sales volume has tripled over the past eight years. As a result of Doll’s leadership, Subaru has grown steadily from selling 187,000 vehicles in 2007, and expects to sell 570,000 in the U.S. this year.

What’s next for Doll and Subaru of America?

Fuji Heavy is nearly doubling vehicle production capacity at their only production plant outside of Japan in Indiana. By the end of 2016, capacity will increase to 394,000 vehicles to meet the high demand for the their 2016 Outback, Forester and Crosstrek all-wheel-drive vehicles. Subaru will also begin building a new-generation 2017 Impreza at the U.S. plant, and to stoke demand further, Subaru will build a new seven-seat crossover in the U.S. beginning in 2018. Tom Doll is the man who turned Subaru into a highly-loved and high-demand commodity and that demand will remain strong into the future.