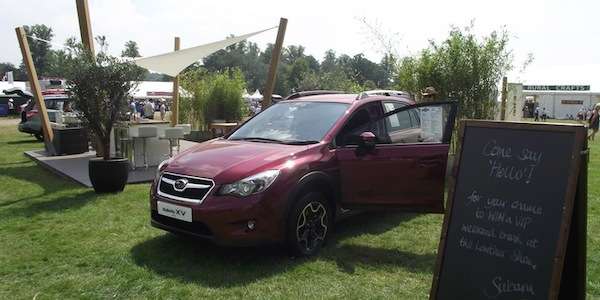 This lucky amateur golfer in the UK has won a new 2014 Subaru XV Crosstrek. What did he do to win it?
Advertisement

It a good thing that golf’s governing body in the UK, The R&A, lifted the restrictions on prizes for amateur golfers. Martin Coward, 66 was playing golf during during a Captain’s Day competition at the Drift Golf Club in Surrey England and hit a hole in one on the 11th hole. If it had been just two and a half years earlier, the maximum prize Coward could have won would have been 500 British pounds.

But because The R&A changed the rules on how much amateurs can win, the lucky UK golfer was handed the keys to a brand new 2014 Subaru XV Crosstrek at the Drift Golf Club in Surrey. This new Subaru XV, worth 20,000 British Pounds, is thought to be the biggest prize in UK amateur golfing history. This was an excellent prize for an amateur golfer.

The Captain’s Day competition had secured sponsorship from Bell and Colville, who has been an official Subaru dealer in England since 1995. They also have other brands like Lotus, Morgan and Saab. The UK Subaru dealer is active in the community and has been involved in motorsport for over 50 years. They sponsored the hole in one competition and gave the new 2014 Subaru XV Crosstrek as the prize.

A charity event at the golf club

It was a sunny day on the golf course and the Captain’s Day competition was organized to raise funds for charity. Nigel Baxter, captain of the club, said: “It made my day that Martin won the car! And that the sun shone! But we did raise over 3,500 for the RAF Benevolent Fund charity. Well done all the members for their incredible generosity! Thanks to Bell and Colville for their sponsorship of the hole-in-one.”

The XV is the biggest prize in UK amateur golfing history

66 year old Martin Coward had a big smile on his face when he was handed the keys to the new Subaru XV. The 2014 Subaru XV Crosstrek is an all-wheel-drive crossover that has been selling well around the globe. The Subaru XV just set out from the UK recently on a 21,700 mile trek from London to Mongolia to prove how tough the Subaru brand really is.

Subaru also sells the Forester SUV, BRZ Coupe, Outback wagon, Impreza compact and WRX STI performance car in the UK. Martin Coward hit a hole in one on the 11th hole and gets what is thought to be the biggest prize in UK amateur golfing history. He gets the keys to a new 2014 Subaru XV Crosstrek.