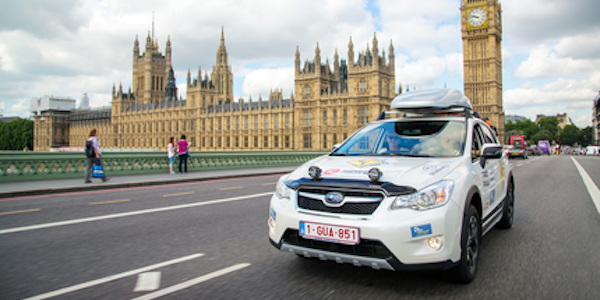 The 2014 Subaru XV Crosstrek takes on a 21,700-mile there-and-back-again trek from London to Ulaanbaatar. Why is Subaru doing it?
Advertisement

Subaru builds some of the worlds best all-wheel-drive multi-use vehicles in the world and they set out to prove it this week with the 2014 XV Crosstrek. Subaru’s newest crossover, the XV is taking off on a on-and off-road adventure and will make a 21,700-mile there-and-back-again trek from London to Ulaanbaatar, Mongolia. The trek will be undertaken by the all-female Canadian team, Offtrax.

The 2014 Subaru XV Crosstrek compact crossover will be subjected to its toughest challenge yet, and Corinne Copreni and Jess Watt, two Canadian adventurers from the Offtrax team, have entered the Mongolia Charity Rally, an epic pan-continental road trip from the UK to Mongolia and back again. Subaru Europe provided Offtrax with a 2014 Subaru XV 1.6i for the journey, which started from London on July 19 July and will take up to three months to complete.

The trip will see thousands of miles of off-road travel. The only modifications made to the car are a hood protector and a sump guard, essential equipment for taking on the toughest terrain after the pavement has run out. The XV Crosstrek is otherwise all standard and even comes with original equipment all-weather tires as other XVs. Of course it comes with the brand’s excellent Symmetrical All-Wheel Drive system.

The trek is done for charity

The 21,700-mile journey is being done for the Mongolia Charity Rally, which raises funds for emergency vehicles and school and medical support in Mongolia. Offtrax is supporting Go Help and Make a Wish Canada, raising funds to grant wishes to seriously ill children. The team hopes to raise in excess of $5,000 (Canadian) along the way. During the trip, the 2014 Subaru XV will visit 32 countries, cross five deserts and span seven different time zones, with thousands of miles covered off-road.

Corinne Copreni, of the Offtrax team said before they left, “Some might think it’s just plain crazy to drive almost 22,000 miles to Mongolia and back, across some of the most unforgiving terrain in the world, all for charity. Well, it might just be, but if it makes you dream, then it’s not crazy at all. After going for a test drive at our local Subaru dealership in Toronto, we were 100 percent sold on the idea that, if there’s one car that could make it through this rally, it’s the Subaru XV.”

The Subaru XV has set out on the 21,700-mile (35,000km) on-and off-road journey from London to Ulaanbaatar, Mongolia and back again. This will be the 2014 Subaru XV Crosstrek's toughest test to date. Stay tuned to Torque News for the latest updates as we follow the team’s progress over the coming weeks and months.