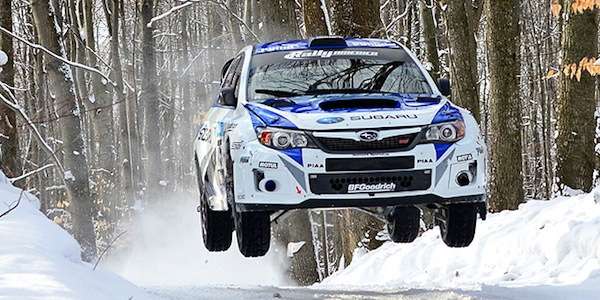 The all-new 2015 Subaru WRX STI cars arrive at the Vermont SportsCar shop to be disassembled and prepped for the season. Can they repeat as champions?
Advertisement

The Subaru Rally Team USA won the championship last year, but this is a new season. Can they repeat as champions? There are new Rally cars for 2014. The all-new 2015 Subaru WRX STI cars arrive at the Vermont SportsCar for the first time. They start with the production cars and they are completely disassembled in their shop where they will build the Rally cars and Global RallyCross cars. But they will start the season with the 2014 Subaru WRX STI cars, while building the new 2015 STIs. But new cars don’t guarantee success.

For the second race, at Rally in the 100 Acre Wood, Subaru Rally Team USA is joined by Travis Pastrana and co-driver Chrissie Beavis. They hung on to take second place overall behind favorite Ken Block. This was Pastrana’s first rally podium after a nearly three year absence from the Rally racing with Subaru. The second place finish at Rally in the 100 Acre Wood was even more remarkable considering he withstood two intense days of rally racing with a repaired broken leg and recently dislocated ankle.

But teammate David Higgins had a disappointing race. Higgins and Craig Drew attacked the first set of stages at the Rally in the 100 Acre Wood, but had a frustrating day ending up 20 seconds behind race leader Ken Block. Piloting the #75 Subaru WRX STI, Higgins and Drew won 4 of 8 stages. However, due to a Rally America rule that does not allow competitors to average more than 80mph, 12 of the seconds gained were not counted.

On the second day disaster struck Higgins and Drew with an engine failure on Stage 9 that forced them out of the race. The Did Not Finish (DNF) and it broke an amazing streak of 22 consecutive podium finishes by Higgins. There are no guarantees when it comes to Rally racing. It’s a demanding sport on the cars and drivers. Can Subaru repeat again this year with the new 2015 WRX STI cars?

The next race will be at Oregon Trail Rally May 2-4 in Portland Oregon. The all-new 2015 Subaru WRX STI Rally cars and RallyCross cars are waiting in the wings. Will the new cars be ready with all the “bugs” worked out? Stay tuned to Torque News for the latest Subaru Rally Team USA driving the 2015 Subaru WRX STI cars news.