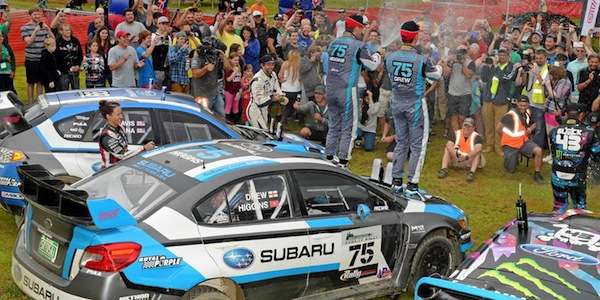 It was called the Battle of the Titans and it was Higgins and Pastrana against Ken Block at New England Forest Rally. Who won the battle?
Advertisement

David Higgins and Craig Drew pushed the pedal down on the #75 2015 Subaru WRX STI from the beginning of the New England Forest Rally and never let up. They dominated the race and Ken Block couldn’t spoil the undefeated season for SRT USA. With the win, the Subaru team also secured their fifth consecutive Rally America Championship Title for Higgins and Drew.

It was called the Battle of the Titans and it was David Higgins and Travis Pastrana in the Subaru WRX STIs battling against Ken Block in his 2012 Ford Fiesta ST H.F.H.V. at New England Forest Rally. At the end it was Higgins and Drew with the victory and a 5 minute 32 second margin over rival Ken Block and Alex Gelsomino who finished second. Travis Pastrana and Chrissie Beavis impressively came back to get on the podium in third place.

Higgins pushed hard from the start and never let up

Higgins jumped out hard on Day 1 and never looked back and won all but two stages the rest of the way. Higgins said after the race, “It was an absolutely fantastic rally! I have some great memories here sometimes driving a little more carefully for the championship and points, but this weekend the shackle was taken off and I went for it right from the start.”

Ken Block stayed close to Higgins until stage six on day two when he missed a corner and went into the ditch. Block lost valuable time and was never able to get close again to the hard charging 2015 STI. In an earlier stage, Block downshifted too hard and broke the gas pedal off his Ford Fiesta ST and had to use a zip tie to continue. It was a rough day for the head Hoonigan.

David Higgins drove a flawless race and didn’t put a scratch on the 2015 WRX STI. Higgins went on to say, “The 2015 Subaru WRX STI is absolutely awesome and every time I drive it I feel more comfortable in it and get more speed out of it. It was great to see more competition this weekend. We are very happy to wrap up the Championship here as well, and continue the quest for a perfect season.”

Pastrana and Beavis have amazing come back

Travis Pastrana and Chrissie Beavis had an amazing comeback. They incurred ten minutes of penalties for not completing stages 2-3 on day one because of an electrical failure, and still came all the way back from 15th place to reach the podium. The duo rolled up their sleeves and pushed their WRX STI hard setting top stage times all day. This was an impressive finish for their inaugural 2015 event.

Ken Block and Alex Gelsomino came into the weekend as the favorite to break the Subaru stranglehold on the championship but was not able to spoil Higgins quest for a perfect season in the 2015 Subaru WRX STI. Pastrana summed it up well, “But I tell you what, David is on fire. His speed, his times, his lack of mistakes. It's pretty amazing. It's tough to catch that 75." The 2015 Rally America series continues August 27-29 with the Ojibwe Forests Rally in Detroit Lakes, Minnesota. Stay tuned.