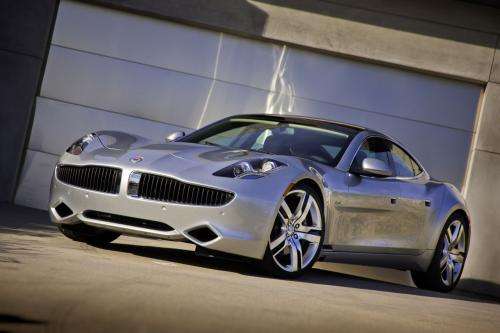 Justin Bieber received a 2012 Fisker Karma for his 18th birthday and within a month did what any red-blooded American kid would do. He wrapped the car in chrome.
Advertisement

Justin Bieber just received a Fisker Karma for his birthday last month and is another in a long list of celebrities to get one. Bieber turned 18 years old on March 1st, and was presented an all-new 2012 Fisker Karma on the Ellen DeGeneres Show. Bieber loves cars like any 18-year-old, and said on the show, “That’s for me?! That’s crazy!”

The Christian Science Monitor reported that Bieber was given the car by his manager Scooter Braun on the show who wanted to get Bieber an environmentally friendly car that doesn’t stand out. Braun told the young singer, “Don't get anything flashy!' You know, we're not about that. Be humble, be humble. And I kind of broke my own rule."

It looks like Bieber is a typical teenager and decided he didn’t like the plain $108,000 Fisker Karma and decided to wrap it in chrome and drive it around on black wheels just to tick his manager off. According to celebrity-stalking site TMZ, Beiber was spotted taking Selena Gomez through the drive-through at Chick-fil-A in the reflective Karma.

It seems that the reflective chrome job isn’t a violation of the law, just a major attention draw that his manager was trying to avoid. But the car has drawn the attention of the LA PD with its row of Fuchsia lights hidden under the front grill, and the blacked out windows are a little too dark for the police to ignore.

Bieber isn’t the first high profile celebrity to stake claim to the 2012 Fisker Karma and he joins a growing list of celebrities to get one. Leonardo DiCaprio was the very first celebrity to receive one back in July 2011. Next in line to get the keys to a Karma were two high profile politicians, former Vice President Al Gore and former Secretary of State Colin Powell.

Fisker received a big celebrity endorsement in September 2011, when the 2012 Karma appeared on the hit CBS sitcom Two and a Half Men. The EV was featured throughout the show’s ninth season. Ashton Kutcher who played Walden Schmidt on the show is another celebrity who has been seen tooling around in a new Karma recently.

So are all these high-profile celebrity Karma owners going to save the EV company? Despite all the celebrity endorsements, Fisker Automotive has faced multiple setbacks. The 2012 Fisker Karma was recalled in December 2011 because of possible fire risks, due to the vehicle’s high-voltage battery.

Additionally, Fisker has lowered their 2012 sales expectations from 15,000 to 10,000 units. Maybe Fisker Automotive is running out of celebrities who can afford the $108,000 price tag and the expensive chrome jobs.

Honest writer wrote on April 11, 2012 - 7:13am Permalink
Interesting story. But the writer doesn't have his facts. FISKER had no fires and A123 their battery was the cause of the POTENTIAL problems. It was fixed in 5 DAYS and again, it was the suppliers issues. All Fiskers issues were the battery and software tied to the battery. They finally figured out it was A123 and A123 admitted it and is paying for everything. It is an awesome vehicle.
Aaron Turpen wrote on April 11, 2012 - 4:33pm Permalink
Yet another reason to hate Justin Bieber.
Anonymous wrote on April 13, 2012 - 8:15am Permalink
Why would you hate him? Or love him? Isn't he just another insignificant human being? Not worth my effort or attention to hate him... And as for the car, it is cool but there are nicer car wrap jobs than that one... But hey if that s his taste, why not.