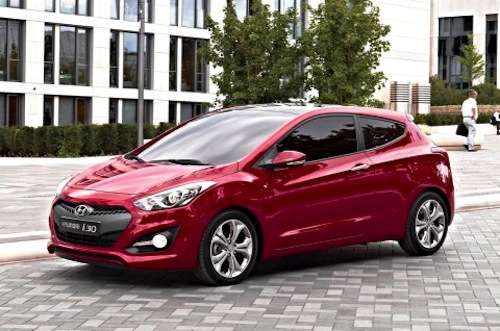 Ahead of its world debut at the 2012 Paris Motor Show, Hyundai has confirmed the new generation i30 Three-Door.
Advertisement

The new generation Hyundai i30 Three-Door has been confirmed by the South Korean automaker and it will make its world debut at the 2012 Paris Auto Show later this month. The three-door Hyundai i30 joins the five-door hatchback and the wagon to extend Hyundai’s ‘made for Europe’ C-segment range to appeal to even more buyers.

Hyundai is expanding their influence in the European market where they have sold over 5 million cars since imports began in 1977. Hyundai designs, engineers and manufactures cars in Europe, specifically for European customers. The i30 was Hyundai’s top-selling model in 2011, with 96.000 units sold. The new three-door will be produced at their Czech factory.

Allan Rushforth, Senior Vice President and Chief Operating Officer of Hyundai Motor Europe, said: “The New Generation i30 three-door has been conceived solely for Europe, and will strengthen Hyundai’s presence further in the segment where we have seen our greatest success since 2007. Just as important, its sporty looks offers a fresh interpretation of fluidic sculpture and will generate greater brand awareness and enhance consumer perceptions of Hyundai inEurope.”

The new i30 three-door offers the best characteristics of the five-door and the Tourer, with a specific European tuned suspension that offers a Flex Steer system that allows drivers to change the steering dynamics depending on their preference and road conditions.

The new three-door hatchback features a more angular roof than the five-door hatch and wagon variants. It has a revised grille, fog lamps, daytime running lights and a redesigned lower bumper. The rear of the three-door gets a new bumper and fog lamps. Standard alloy 16-inch wheels finish out the new exterior look.

Hyundai will offer four engines with five different horsepower ratings and will come mated to a six-speed manual or automatic gearbox. The emissions champion is the 1.6-liter 126 horsepower diesel which generates 97g/km of CO2.

The New Generation Hyundai i30 three-door will be officially unveiled at the 2012 Paris Motor Show during the company’s press conference on Thursday September 27th at the Hyundai booth.