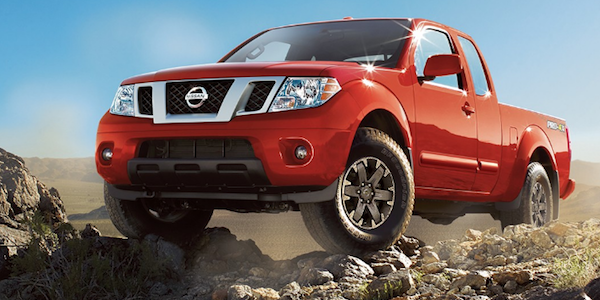 How Nissan Frontier Out-Climbs the Rest

The 2016 Nissan Frontier is on a tare. What will happen when the new models arrive?
Advertisement

The 2016 Nissan Frothier is selling as fast as dealers can get them. Nissan reports the 2016 Frontier is selling at an astounding 84 percent increase over the previous June. Sales almost doubled from the same month last year. Nissan’s popular small crossover Rogue, also saw good sales and is the second-best seller in the lineup behind the Altima sedan.

The 2016 Frontier received a few minor upgrades that include three new exterior colors (replacing three others) and some trim level changes. Pricing remained the same on all Frontier models for 2016. Buyers are responding to the new Sunset Orange, Gun Metallic, and Magnetic Black exterior colors. What else sets Frontier apart from the Toyota Tacoma, Chevy Colorado and GMC Canyon?

The Frontier gets a big bump from J.D. Power

Nissan is doing a good job of building quality vehicles. The Frontier experience fewer problems than Chevy, GMC and Toyota. The J.D. Power IQS study examines problems experienced by vehicle owners during the first 90 days of ownership. Initial quality is determined by the number of problems experienced per 100 vehicles (PP100), with a lower score reflecting higher quality. The Nissan Frontier had the lowest score among mid-size pickups. Buyers can expect less problems in these vehicles.

Nissan has not announced when the Frontier will get a badly-needed remodel, but mid-size truck buyers can expect it to be coming soon. Nissan just launched the new full-size Titan XD that will attempt to carve out a niche in unchallenged territory between half-ton and three-quarter-ton segments. Nissan is keeping things close to the vest regarding a new Frontier to avoid taking attention away from their new Titan XD full-size truck.

When the new Frontier does arrive, likely as a 2018 model next year, it will get much-needed exterior and interior styling changes along with Nissan’s latest NissanConnect and mobile apps. The Toyota Tacoma and Chevy Colorado have received upgrades and the Nissan Frontier is next to step up and give mid-size truck buyers a remodeled option. Now that the 2016 Nissan Titan XD has arrived, Nissan's next big project will be to update its aging midsize Frontier. Even without any updates, the 2016 Nissan Frontier is on a tare. Look for the remodeled Nissan Frontier to be an even bigger player in the competitive mid-size pickup market.

JD59 wrote on July 7, 2016 - 9:49pm Permalink
I own a fully loaded 2015 Frontier 4X4 Crew Cab 4X4 SL long bed pickup. This new Frontier truck has been perfect, since the day I bought it. Nice leather heated power seats, outstanding stereo, navigation system, 4.0L stout engine, & 18" wheels. This truck is a pleasure to drive, and I highly recommend the Nissan Frontier.