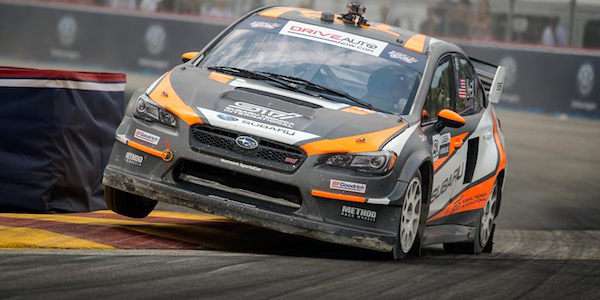 How Close is Subaru's WRX STI Supercar From Being GRC Ready?

The 2016 Rallycross season hasn’t seen any podium finishes for SRTUSA. Will the 2017 Subaru WRX STI GRC Supercar be ready?
Advertisement

The Subaru WRX STIs had a tough go of it at Red Bull Global Rallycross at RFK Stadium in Washington DC. Isachsen had trouble all weekend and Lasek was in the Final but couldn’t catch the faster cars. What is Subaru trying to accomplish in the in the 2016 Global Rallycross season?

Subaru and Subaru Tecnica International (STI) are using the 2016 Red Bull Global Rallycross Championship races to prepare a new WRX STI Supercar for 2017. A new car is coming but the 2016 WRX STI GRC cars are struggling big time. SRTUSA and STI have a long way to go to get the 2017 WRX STI GRC Supercar ready to compete with the top teams. What happened in DC?

Friday’s event in Washington DC started well for Isachsen while Lasek had an unfortunate incident in Turn 1. Lasek slammed into Brian Deegan after he spun out in front of the #81 WRX STI. Bucky was in second place leaving the corner, but the race was red-flagged. A GRC rule prevented him from being able to restart the race because of damages to the from top the STI. SRTUSA techs couldn’t get the car repaired in time to start the race.

#81 WRX STI was repaired and was ready for Day 2

Lasek’s #81 WRX STI was repaired overnight and was ready for Saturday’s action. Lasek made the Final, but Sverre Isachsen failed to advance from the Last Chance Qualifier (LCQ).

Isachsen’s #11 WRX STI experienced troubles throughout the weekend and didn’t have enough speed to fight the faster Volkswagen and Ford GRC cars. An intense but fast-moving storm hit he area right before the LCQ caused temporary havoc with the course and service park. The sun came out and allowed the event to continue as planned. Scott Speed’s Volkswagen Beetle won the race, with Patrik Sandell in the Ford Fiesta ST taking second and Tanner Foust’s VW Beetle rounding out the podium.

Another disappointing weekend for SRTUSA

The 580hp 2016 Subaru WRX STIs and SRTUSA had another disappointing weekend as the two cars have yet to find the desired speed. Subaru says they’ve made substantial improvements for the 2016 season, but there’s a long way to go to get the new STI competitive with VW and Ford.

Subaru Tecnica International (STI) and Subaru technical partner Vermont SportsCar are working on a new 2017 Subaru WRX STI Supercar that will be able to compete in the tough Red Bull Global Rallycross Championship. Up until now they have had little success because of various mechanical issues with their current WRX STI GRC cars. Issues continue to keep them off the podium in 2016.

There’s s almost a full month until the next GRC Round in Atlantic City, New Jersey on August 28. SRTUSA and STI will continue the development of the 2017 Subaru WRX STI Supercar’s Rallycross platform. Stay tuned.