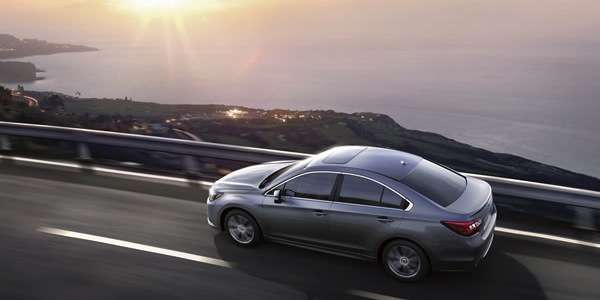 One of Subaru’s core values that is putting the brand ahead of the competition is its new safety technology developed by parent company Fuji Heavy Industries. It’s called EyeSight, and it’s the best for preventive safety in the industry. The new 2016 Subaru Legacy gets this new technology and it’s available now in Canada.

For the 2016 model year, all Legacy trim levels now come standard with wiper-linked automatic on/off headlights, which activate headlights if the wipers are on for more than 10 seconds, This feature helps increase visibility of the Legacy for the driver as well as to others on the road. The rearview parking guide now has a customizable on/off function for the guidelines, while a keyless entry lock and unlock chirp has been added to provide peace of mind.

2016 Legacy Touring Packages (both 2.5i and 3.6R) add an auto-dimming rearview mirror with Homelink and a larger clock and outside temperature display, as well as a Subaru Rear/Side Vehicle Detection (SRVD) off indication in the dash. Additionally, the Legacy 3.6R in all trims has improved braking force as the result of a larger brake booster.

Consumers can upgrade to the optional Subaru EyeSight Driver Assist Technology for even more preventive safety. It’s been enhanced and is available on the 2016 Legacy and comes with the addition of Lane Keep Assist which the driver can activate with a steering wheel mounted switch.

The new enhancement to EyeSight activates above 40 mph if the EyeSight camera detects the vehicle drifting from the lane and a steering assistance control engages to direct the vehicle back into the lane. If the vehicle continues across the lane, Lane Departure Warning is triggered and audible and visual alerts are engaged. 2016 Legacy Limited trims also feature standard Blind Spot Detection + Rear Cross Traffic Alert, which are included with the EyeSight option on Premium trims.

Like all Subaru models, the new Legacy has achieved an Insurance Institute for Highway Safety 2015 Top Safety Pick as well as a 2015 Top Safety Pick+ (models equipped with optional EyeSight). All Subarus are IIHS Top Safety Picks 7 years running (2009-2015). With all these new features, the 2016 Subaru Legacy continues to be the leader in the mid-size sedan segment in safety.