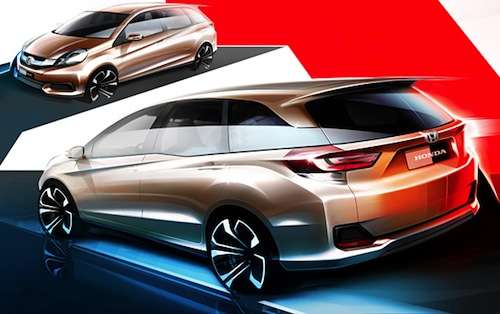 Honda reveals 2015 MPV ahead of world debut in Indonesia

Honda has released a new sketch of the all-new 2015 MPV that will make its world debut in Indonesia. It will compete in the biggest category in the Indonesian automobile market.
Advertisement

Before its official global debut in Indonesia in two month’s, Honda has released a teaser sketch of the all-new 2015 Honda MPV that will be launching in Asia. The sketch reveals the back and front of the new MPV and gives a good idea of what to expect when it makes its global debut at the upcoming 2013 Indonesia International Motor Show September 19 in Jakarta, Indonesia.

The new 2015 MPV is being developed specifically for the Asian market and will be the first Honda product in Indonesia to be introduced to the entry level MPV segment. Honda R&D Asia Pacific Co., Ltd. in Thailand and P.T. Honda R&D Indonesia have been busy designing the new compact model. It will be competing in the biggest category in the Indonesian automobile market.

Honda tells us it will be powered by a 1.5-liter gas engine that will need to powerful enough for its size with seven seats in a 3-row configuration. Honda may borrow the 1.5-liter powerplant from the City model. The new MPV should get excellent fuel mileage and will be a sporty performance model that should be a hit in the Asian market. It has the styling and utility that will likely make it a popular choice. The design features aerodynamic styling and nice character lines with flared wheel arches. The slung low roof line gives the MPV a sporty posture.

The new 2015 MPV compact will be an entry-level model designed specifically for the Indonesian market in mind. Production will start in 2014 and will be locally produced in Indonesia as the first product of its new second plant in Karawang. Honda will include many of its advanced safety features that already come in Honda products around the globe.

The Indonesian roads are much different than other global markets and are crowded and many are undeveloped. Tomoki Uchida, President Director of P.T. Honda Prospect Motor says, "The new Honda MPV has been developed especially for the needs of customers and road characteristics in Indonesia. This makes the new Honda MPV a very special product for Honda in Indonesia."

The new MPV will have to be able to stand up with the rigors of the Indonesian roads and drivers. If the new compact can stand up here, it will be a big hit in the Asian market. The MPV will built on the Brio platform and join the Brio family of vehicles along with the existing sedan and hatch models.

Look for the official unveiling of the 2015 Honda MPV in two month’s on September 19 at the 2013 Indonesia International Motor Show.

LG's New EV Battery Plant Is a Welcome News for Tesla
Tesla Giga Berlin's New Hurdle: It's Not Only the Gov't, but Now Tesla Itself
END_OF_DOCUMENT_TOKEN_TO_BE_REPLACED