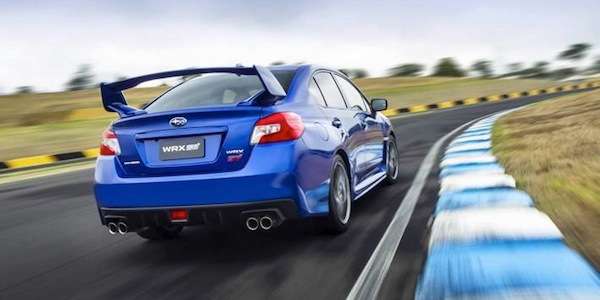 Subaru has announced they will attempt a record setting run with the new 2015 Subaru WRX STI at the Isle of Man. Can Mark Higgins break his own record?
Advertisement

If you haven’t seen the record-setting run by the 2011 Subaru WRX STI at the Isle of Man in 2011 you need to, and we’ve included it below. It’s an iconic video at the famed Isle of Man TT Mountain course where Mark Higgins set an amazing record run of 115.36 mph on the 37 3/4 mile course. Now, Subaru and Higgins will return in May and early June, 2014, and will attempt to break their own fastest car lap time in a new 2015 Subaru WRX STI production car.

Mark Higgins will climb aboard a production U.S.-spec 2015 Subaru WRX STI and run the famed Isle of Man TT Mountain course again. The only modifications to the rally-bred STI will be the addition of a roll-cage, race harness, fire suppression system and modified springs and dampers to handle the sustained ultra-high speeds of the course.

In the record run at Isle of Man TT Mountain course set in 2011, Higgins took the U.S. production spec 2011 Subaru WRX STI for an incredible ride. The car came with the 305 hp Boxer engine, Symmetrical AWD and a top speed of 162 mph with a 0-60 time in less than 5 seconds. Subaru also made some modifications to that car so it would be safe for the incredible speeds. Higgins achieved speeds of 162 mph and a lapped time of 19 minutes 37 seconds over the 37-mile track, navigating more than 200 corners.

Can Subaru and Higgins break that incredible fastest car lap time in the new 2015 WRX STI performance car? Subaru says they will complete 3 timed runs on Saturday May 31, Monday June 2 and Wednesday June 4. The 37.8 mile road that tours the island that is near the UK, will be completely closed for the attempted record run and the event “has been the subject of comprehensive consultation with all relevant parties,” according to Subaru.

Subaru of course is using the event to bring more attention to the dealer launch of the new 2015 WRX STI around the globe. But Subaru is also returning as a partner with the Isle of Man, renewing its sponsorship of the race and will be the official car of the TT according to the press release by Subaru. Dominick Infante, National Manager of Product Communications, Subaru of America, said, "The Isle of Man is paradise for anyone who appreciates motorsport and there is nothing like the TT road course anywhere else."

Mark Higgins is a multiple Rally Champion and is very familiar with the historic Isle of Man TT Mountain Course, because this is where he grew up. In 2011, Higgins took the U.S. production spec Subaru WRX STI for an incredible ride and set the fastest car lap time. This year, he will take a new-generation U.S.-spec 2015 Subaru WRX STI and attempt to break his old record. Will Higgins be able to break the lapped time of 19 minutes 37 seconds? It will be an exciting ride for Higgins in the newly-redesigned STI. Stay tuned to Torque News for the latest 2015 Subaru WRX STI news.

Watch Mark Higgins in the 2011 WRX STI at the Subaru Isle of Man Record Attempt run in 2011 video.