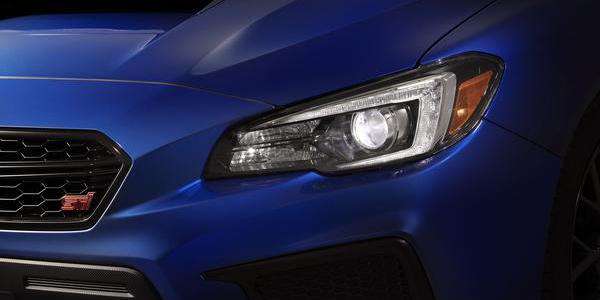 If Subaru would launch this Special Edition 50th Anniversary 2018 Subaru WRX STI, it would sell out in a matter of minutes.
Advertisement

If Subaru wants to get WRX STI fans revved up, bring out a 50th Anniversary Special Edition 2018 Subaru WRX STI worthy of the special occasion. Subaru of America (SOA) is celebrating 50 years in the U.S. in a big way with celebratory events, 50th anniversary special edition models and by giving away 50 new cars. To commemorate the special anniversary, the Cherry Hill, NJ automaker announced they will launch special edition models that will debut in early 2018. Subaru will likely bring out a Special Edition 50th Anniversary STI to mark the special occasion. What would excite fans?

STI fans want more than a unique exterior color, a few badges, and matching stitching on the inside. They want something that’s worthy of SOA’s 50th anniversary. Here’s one that would sell out in minutes after it’s announced by Subaru of America.

Here’s what would excite WRX STI enthusiasts. Make some significant changes under the hood of the Special Edition STI. Either bring more power upgrades for the current 305hp 290 lb. ft of torque spec boxer mill, or better yet, drop in a new 2.0-liter FA20 Direct Injection Turbo (DIT) powerplant with 325-350 horsepower. That would make fans happy.

Subaru has been running the EJ25 2.5-liter mill since it’s introduction in 2004 with very little power upgrades. Fans think it’s time for Subaru to change to the FA20 DIT power plant with upgraded internals and more power. What better time than in a new 50th anniversary edition?

If you really want to get fans revved up, dial up a new Special Edition 50th Anniversary 2018 STI with the hatch body style. STI enthusiasts have been asking for the 5-Door hatchback WRX STI since Subaru dropped it for the 2015 fourth-generation model.

It offers extra utility, and makes it more usable for transporting cargo, sports equipment, and the family pooch. Subaru is already selling more new hatchback Impreza’s for these reasons. It’s a popular body style, STI fans want it more than the sedan, and it would sell like crazy. More on Page 2.

Subaru of America is celebrating 50 years in the U.S. with celebratory events, giving away 50 new cars to a charity, and special edition models that will be arriving in early 2018. SOA will likely be bringing out a 2018 Subaru WRX STI 50th anniversary model. A Special Edition STI 5-Door hatch with a new 325hp 2.0-liter FA20 DIT mill would excite fans and sell out in a matter of minutes after it was announced.

Gabe wrote on February 26, 2017 - 12:43pm Permalink
I just read a fan fiction article about an sti? Now I'm commenting on Subaru fan fiction? What has my life come to?
Carey Vandenberg wrote on February 26, 2017 - 6:30pm Permalink
If Subaru doesn't come out with a 5 door WRX I'll be forced to buy an Audi or Volvo to replace my 2008 WRX. I'm 54 and I've only owned 1 sedan in my life and I want to be lower to the ground ie no SUV or SUV wannabes