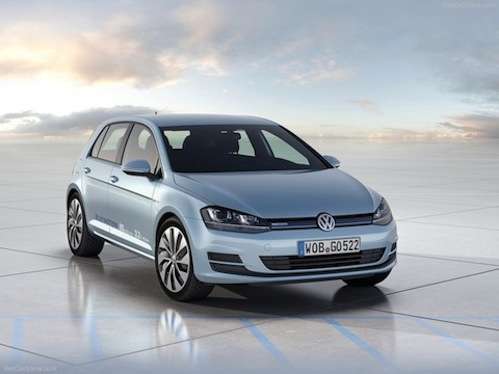 Golf BlueMotion concept: The most fuel-efficient Golf ever

The new Volkswagen Golf BlueMotion concept has a fuel-sipping diesel powertrain making it one of the most fuel-efficient cars on the planet.
Advertisement

Diesels have always been highly efficient engines, and with the latest technology, VW shows that they can be some of the stingiest engines in the world. The new BlueMotion concept is powered by a newly developed 1.6-liter TDI (turbo diesel). The four-cylinder turbodiesel uses the latest direct injection and develops 110 horsepower and 184 lb ft of torque.

Volkswagen engineers were able to reduce the internal friction of the 1.6-liter diesel using various measures and technology. It uses an innovative thermal management system that shortened the warm up phase, an exhaust gas recirculation (EGR), a cylinder pressure sensor, a two-stage oil pump, a switchable water pump and a water-cooled charge air cooler directly in the intake manifold converge. All contribute to the excellent fuel economy.

Other aerodynamic improvements include a lowered suspension, a roof spoiler, side air deflectors on the rear window, an enclosed radiator grille, an optimized air cooler, special underbody panels, optimized brake cooling ducts and new C -pillar spoilers. The Golf BlueMotion achieves a drag coefficient of 0.27, making it one of the best vehicles in its class.

Before now, the economical Golf was offered in only one BlueMotion model. When Volkswagen brings it to production, they will offer it in two equipment versions, Trendline and Comfortline. The Golf will be offered with 15 and 16-inch wheel sizes wrapped in rolling resistance tires.

Tesla Contemplates A New Strategy for China Retail even As Sales Boom
Jay Leno on Elon Musk & EVs: “I Think He Should Get ... Credit"
END_OF_DOCUMENT_TOKEN_TO_BE_REPLACED