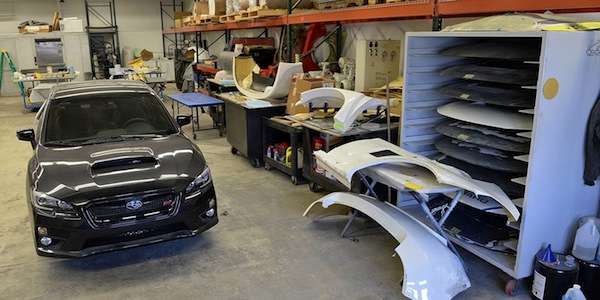 The 2015 Subaru WRX STI RallyCross race car is being prepared by Vermont SportsCar and STI. The Global RallyCross season is getting close.
Advertisement

The all-new 2015 Subaru WRX STI RallyCross car is getting ready for the upcoming Global RallyCross season, here is a first look at the new car. Vermont SportsCar is preparing the all-new 2015 Subaru WRX STI race car in their shop and they are preparing for the Red Bull Global RallyCross season opener in Barbados which in only a month away. The race takes place May 17-18 at the Top Gear Festival, Barbados.

Vermont SportsCar has been in operation since 1988 and is the premier rally car prep shop in North America. They specialize in the construction and preparation of rally cars and running championship caliber teams for manufacturers and corporate sponsors.

Since 2005 Vermont SportsCar has had official support from Subaru of America, and in 2006 together created Subaru Rally Team USA. Vermont SportsCar handles all facets of the team, including the build of the team rally cars. The team rally cars are built nearly entirely in-house, including the shell prep, roll-cages, engines and many of the composite parts.

The company recently has also managed Subaru’s Rallycross program, fielding a multi-car team in the Global RallyCross Championship. Global RallyCross is growing quickly and is one of the most exciting motorsports on the planet. It’s a great venue for Subaru to get even more exposure for their performance WRX and WRX STI production cars.

“The sport of Rallycross continues to gain interest in the USA” stated Rob Weir, Motorsports Marketing Manager. “We’re seeing GRC’s proposed TV coverage and fan experience at events this season as a win-win. The turbocharged, all-wheel drive powertrain of a Rallycross car is extremely similar to a production Subaru WRX STI; so the sport, along with rallying, is the ideal platform to display the performance abilities of Subaru Symmetrical All-Wheel Drive.”

Sverre Isachsen and Bucky Lasek are ready after testing last month and extremely eager to get back into the extreme action at the Red Bull Global RallyCross season opener in Barbados. Travis Pastrana will join the team June 7 at the X Games, in Austin, Texas. Take a look inside the pics above at the Vermont SportsCar shop as Subaru Rally Team USA prepares the 2015 Subaru WRX STI RallyCross cars for the 2014 RallyCross season.

Patrick Rall wrote on April 16, 2014 - 2:53pm Permalink
I love the look of the new WRX...hopefully it helps the Subaru teams compete a little more in Global RallyCross this season. The field is only getting stronger with the new VW models, but we know that Isachsen and Pastrana know how to win when they have a winning car.