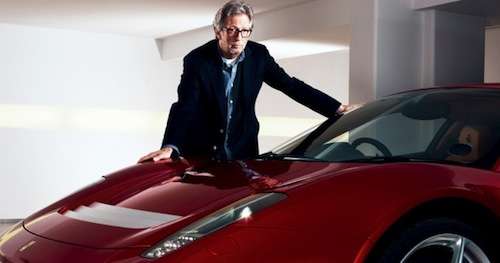 In an interview by Ferrari Magazine, Eric Clapton talks about the incredible process of designing his $4.75 million one-off SP12 EC custom Ferrari.
Advertisement

When Ferrari unveiled Eric Clapton’s $4.75 million one-off SP12 EC in May, it was a site to behold for sure. Before the official unveiling by Ferrari we heard rumors that Ferrari was building a new supercar for Clapton. The guitar legend worked with the Ferrari Style Center, Pininfarina and Maranello’s engineers in designing the multi-million dollar supercar. This was not his first rodeo as Clapton has owned a number of the expensive Italian sports cars, but this one would be the most special of all of them.

This custom SP12 EC, (special project car, number 12, Eric Clapton) was designed and built to pay tribute to a car in which he crashed and was almost killed: the singers favorite 1970s Ferrari 512BB. He loved that car and it was featured on the cover of his "Slowhand" album. Clapton has owned three other Ferrari 512 BB’s and this new creation designed with the help of the Ferrari Style Center, took its inspiration from the 458 Italia.

A rare opportunity for Eric Clapton

Not many people get to design and create their own Ferrari, but when Clapton was presented with the idea, he just couldn’t resist the rarest of opportunities. In the Ferrari Magazine interview, Clapton says, “When the idea was first presented to me, I thought, this is an opportunity that’s too good to miss. While this door is open I should get in there.” And he certainly jumped at the chance to work with Pininfarina and Maranello’s engineers in developing the custom masterpiece that eventually cost him $4.75 million.

His experience was nothing like going in and checking off a a few options from a list. This went way beyond what he had imagined it could be. Ferrari explains that this process of designing a custom one-off car is a special thing for sure. “This is the promised land, beyond ticking the options list, beyond even the brilliant opportunities afforded by the Tailor-made scheme.”

Clapton made many trips to Maranello and Turin as he worked with Director Flavio Manzoni and a team at Pininfarina. And for the famous singer, it was an unbelievable experience he will never forget. “To go to Pininfarina with a legitimate reason for being there was fantastic, meeting the guys, the family. One of the most satisfying things I’ve ever done. There will never be anything like this again. This is me aged seven listening to [Juan Manuel] Fangio and [Alberto] Ascari. It’s all there…”

But as Clapton found out, this process of designing a supercar is “not for the faint-hearted.” In fact many people who has started the process with Ferrari, have not been able to finish and have backed off once they see how much work is involved. The freedom of designing a one-off car also will be too much for some and “blows their minds.” said Clapton.

Clapton in the interview said, “There’s no doubt you need to have a very clear idea of what you want, because this is going to be available for everyone to see at some point. So it better be bloody good! Really, it’s a reflection of my way of looking at things, of my taste, and that’s quite a responsibility. It’s quite frightening, to an extent. That’s partly why I didn’t go with a completely blank canvas: I decided to make it an homage to another car. The BB 512i. Because that was the car I had the best time with.”

Clapton has paid the price

Ferrari Design Director Flavio Manzoni says the process is so involved and such an immersive experience, that “it’s like creating a concept car.” An indecisive individual would not do well, but the musician is a man who definitely knows what he likes. Clapton is well-known for his interest in fashion, art and design, so he was well-equipped for the rigors of designing the custom Ferrari SP12 EC.

Clapton says he develops a special relationship with each of his cars, and this one will take time to see what it’s personality is. “That’s what I need to do with this car. As much as it’s a beautiful, one-off thing, it still has to be used properly. It’s like riding a horse. At some point you have to establish the relationships. So the truth is there might be a few dents along the way… it’s going to happen. And I’m fine with that.”

It must be a beautiful thing to be able to put a few dents in a one-off $4.75 million work of art. Eric Clapton has earned the right and paid a big price in time and money to be able to do it.