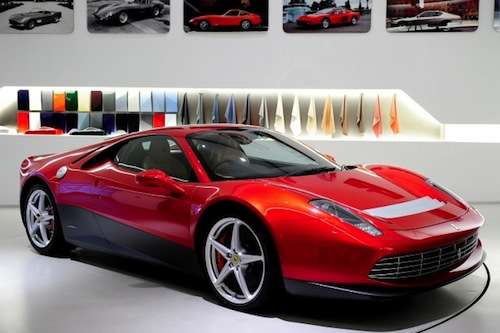 Back in March, we told you about a car that was caught on video that was thought to be the Ferrari custom built for Eric Clapton. Now Ferrari has officially announced and unveiled the one-off custom Ferrari for the world to see. The supercar was designed by the Ferrari Style Center in collaboration with Pininfarina and Maranello’s engineers. Clapton has loved Ferrari’s for many years and has owned a number of the expensive rides.

The custom SP12 EC, (special project car, number 12, Eric Clapton) was designed to pay tribute to the singer’s favorite 1970s Ferrari 512BB. That car which he previously crashed and was almost killed, was on the cover of his "Slowhand" album. He has owned three other Ferrari 512 BB’s and this new creation takes its inspiration from the 458 Italia.

In Ferrari Magazine, Eric Clapton talked about his passion for the car and how the idea was originally born. He said that embarking on the project was like “being in front of a gigantic blank canvas that had to be painted on” and that being involved with the design and development of the car was “an incredible experience, one of the most satisfying things I’ve ever done."

We can just imagine how satisfying it would be to give Ferrari a blank check and see what their One-Off Programme can create. The car is estimated to be worth $4.75 million, but because it's a unique one-of-a-kind creation, and will be owned by the English musician, it will likely be worth much more.

“The world-famous guitar player has been attached to one particular Ferrari model: the 512 BB, of which he has owned three over the years,” claimed the company. “So his desire was to drive a car inspired by this model, with influences from the multi-award winning 458 Italia.”

What Clapton requested was a 458 Italia, with the exterior styling of a classic Ferrari model, the F12BB. He originally asked for the car to be powered by the V-12 engine that powers the Ferrari 599, but there's not enough room within the frame to slide in the larger V-12. The one-off SP12 EC retains the regular V-8 Ferrari 458 Italia engine which pumps out 562 horsepower and 398 lb. ft. of torque. Ferrari says the car has a maximum speed of 202 mph and will go from 0-100 kph in 3.4 seconds. The engine is coupled to a duel-clutch seven-speed F-1 gearbox.

The car took two years to build and gets a special bespoke interior and what appears to be a unique shade of Ferrari rosso paint to finish off the beautiful car built for the 67 year-old Eric Clapton. The custom one-off SP12 EC supercar should be a nice addition to Clapton's collection of Ferrari’s.