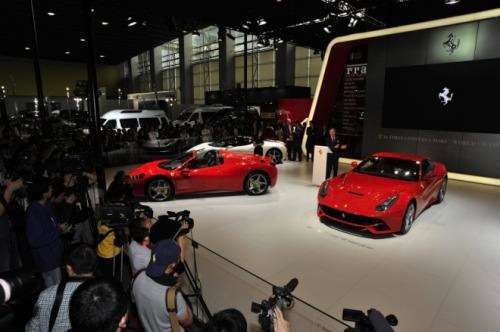 2012 marks the 20th anniversary of the first Ferrari officially imported into China and the new F12 Berlinetta made its debut in China. It started with a celebration that saw hundreds of thousands of enthusiastic spectators line the streets to see Ferrari’s lineup of cars. The cars included a new Chinese market 458 Italia as they made their way to the Guangzhou International Auto Show.

The huge 20th anniversary parade included over 130 Ferraris, which is the biggest ever seen in China. 250,000 spectators turned out on the streets of Guangzhou to view the Italian sports cars. “It has been a marvelous day of celebrations,” commented Luca di Montezemolo,“with many enthusiasts, a lot of young people and the city full of Ferrari flags. This has been the best demonstration yet of what the Prancing Horse represents in China – not just from a commercial point of view, but above all else for the Chinese people’s passion for Ferrari.”

The highlight of the parade was the appearance of a new version of the 458 Italia. The new 458 Italia appeared for the first time in public and will be produced as a limited series for the Chinese market. The new car will be produced with “characteristic Chinese elements” and finished in a special Rosso Marco Polo. The parade also included a number of important classic Ferrari models, including Dino, Daytona and Daytona Spider, 275 GTB, 288 GTO and 365 GTC.

To finish off the celebration, Luca di Montezemolo, Chairman of Ferrari, along with Mr. Edwin Fenech, Ferrari Greater China CEO, attended the 10th China Guangzhou International Auto Show where the F12 Berlinetta, the most powerful high-performance V12 ever built by Ferrari, made its first public appearance in China. Along with the new F12 Berlinetta, the complete range of new-generation Ferrari models were showcased at the show.

The powerful F12 Berlinetta drew a lot of attention, just like it did at its U.S. debut. The Chinese were excited to see the new supercar that is Ferrari’s most powerful car ever built. The 6.3-liter V12 produces 729 horsepower and 508 lb ft of torque. The F12 Belinetta gets a considerable 120 more horsepower than the Ferrari 599 GTB it replaces.

The sports car has a lower weight by 129 pounds and will launch from 0-62 in just 3.1 seconds with a top speed of 211 mph+. The new F12 will propel the driver from 0-124 mph time in 8.5 seconds, which is quicker than a McLaren F1. The F12 Berlinetta is the most high-performance road car in Ferrari history. Ferrari also brought their first four-seater, four-wheel drive V12 GT FF car, the California 30 and the coupe and the Spider versions of the 458 were also on display at the show.

China is the world’s largest auto market and Ferrari knows the importance of introducing the new F12 Berlinetta to the Chinese market. 20 years is just the beginning for the Italian automaker, and the huge response from the Chinese shows the future is bright for Ferrari in Asia.