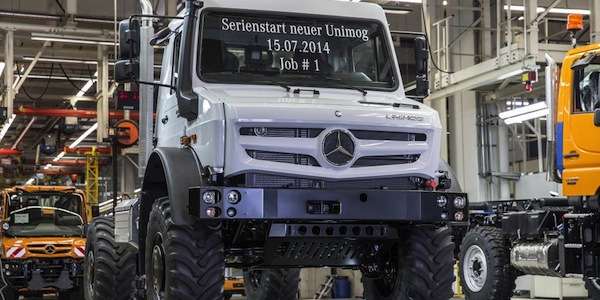 The largest most extreme 2015 Mercedes-Benz Unimog U 5023 4x4 ever rolls off assembly line in Worth. Why is it called the most extreme off-roader?
Advertisement

Who produces the worlds largest most extreme all-terrain vehicle on the planet? It’s a 2015 Mercedes-Benz Unimog and its called the new-generation U 5023 4x4. This monster rolled off the assembly line on July 15 to the applause of the workers who made it and from numerous guests from the world of politics and industry.

Yaris Pursun, Head of Mercedes-Benz Special Trucks, said at the ceremony, "The new extreme all-terrain Unimogs set a new benchmark in the off-road sector. They impress with their ability to handle every terrain and master every challenge, be it in forest fire-fighting, flood areas or open-cast mining. The Unimog is an all-rounder, and we've been able to further improve its qualities despite the major challenges posed by Euro VI. That's a really fantastic achievement."

Extreme use is encouraged

The German Worth plant is the largest truck plant in the world and produces the new Unimog U 5023 4x4. It's the newest member of the Unimog family of extreme vehicles. This monster will be best utilized for its off-road performance for things like forest fire-fighting, pipeline construction, disaster control, crane operations or expeditions. The massive Unimog will be used for rescuing people, recovering machinery or transporting passengers to the remotest places on the planet.

It comes with a unique cab-behind-engine configuration with a redesigned radiator grille and bumpers equipped with state-of-the-art bi-halogen headlamps. Driver and passengers remain comfortable with the new heating and air-conditioning system. The new-generation vehicle operation and handling are made easier by the front camera, which provides an extended field of vision.

Its off-road handling characteristics are unsurpassed

Its off-road handling has been enhanced with a lower center of gravity, compressed-air disc brakes on all wheels, stronger axles, a revised torque tube configuration with strengthened axle connection at the front, new torsion-bar stabilizers on the front axle and dirt guards for all assemblies and components. An extra off-road transmission range covers speeds between 2.5 km/h and 35 km/h. The Tire control Plus tire pressure control system has been completely redesigned with selection options for "Rough road", "Sand" and "Road".

Standard equipment on the big all-terrain Unimog includes engageable all-wheel drive, differential locks, ABS and EQR (Electronic Quick Reverse). This off-roader will allow safe driving in extreme off-road situations. It features torsional flexibility of up to 600 mm, an axle articulation of up to 30 degrees, high angles of approach/departure of 44 degrees at the front and 51 degrees at the rear, a breakover angle of 34 degrees, an extremely high slope climbing ability of 45 degrees, a side tilting angle of 38 degrees and a fording ability of a maximum 1.20 meters.

If you want the most extreme all-terrain vehicle on the planet, the new-generation 2015 Mercedes-Benz Unimog U 5023 4x4 is the ticket. It will take its owner anywhere they want to go. Mercedes has not released pricing yet on the massive new off-roader, but it won’t come cheap.

Other Mercedes-Benz Unimog stories of interest.
Why the Mercedes Unimog is most extreme off-roader on the planet