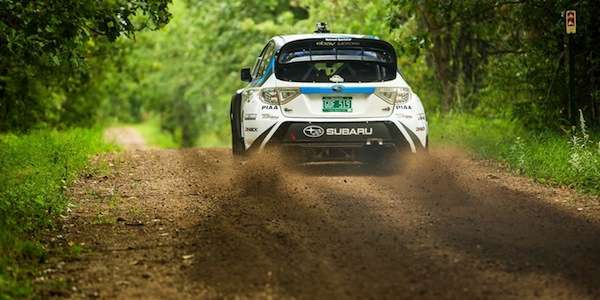 Even after early Championship victory Higgins keeps pedal down

The victory at Ojibwe Forests Rally for the 2014 Subaru WRX STI piloted by Higgins shows why he’s a true champion.
Advertisement

With the 2014 Rally America Championship already secured, David Higgins could have taken it easy driving the Subaru WRX STI, but that’s not what he did. Higgins was being pushed by teammate Travis Pastrana at the Ojibwe Forests Rally and Higgins pushed his 2014 Subaru WRX STI even harder to keep the lead and win the rally.

The first day saw David Higgins and Craig Drew battling Travis Pastrana and Chrissie Beavis and they had just a 22 second lead over their Subaru teammates. Rain had fallen a few hours before the start of the race in Detroit Lakes Minnesota and it helped keep the dust down. This was a welcome site as last years race saw severe hanging dust that required 4 minute intervals in an attempt to keep the drivers safe.

Pastrana pushes a little too hard

Higgins and Drew had to keep the pedal down as Pastrana and co-driver Chrissie Beavis in the #199 Subaru STI were only 24.1 seconds behind at the beginning of day three. Pastrana was pushing hard to catch teammate Higgins and maybe pushed too hard when Travis and Chrissie slid off the road and became stuck in a ditch on the final day’s first stage. They were forced out of the race and this was Pastrana’s first DNF (Did Not Finish ) of the season after a string of four consecutive podium finishes prior to the Ojibwe Forests Rally.

Higgins was able to let up slightly and claimed another victory at the 2014 Ojibwe Forest Rally, in Detroit Lakes Minnesota. It was a dominating performance for Higgins and Drew as Subaru Rally team USA's championship duo led the race from the very first stage and winning all but two of the event’s sixteen stages.

Higgins and Drew never looked back

David Higgins said after the race, “This rally is always a difficult one and this year was no different. We had thick fog to contend with on Friday night, plus real tricky road conditions where it would be very slippery and wet. Travis was pushing real hard and that was a big challenge to go in those conditions. After Travis exited the rally we obviously had it easier but we still pushed a bit, tried some different things with the car.”

The victory at Ojibwe Forests Rally for the 2014 Subaru WRX STI piloted by 2014 Rally America Champion David Higgins shows why he’s a perennial winner. The final stop on the Rally America schedule will be in Houghton, Michigan at the Lake Superior Performance Rally October 17-18.