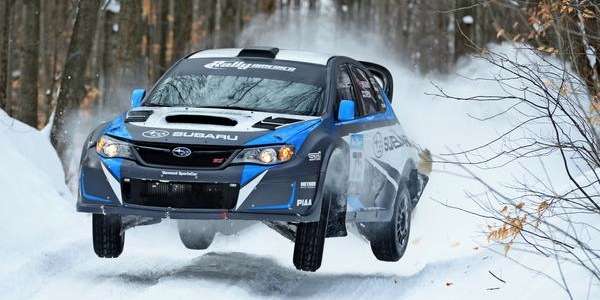 Don’t attempt this with the 2015 Subaru WRX STI

The all-new 2015 Subaru WRX STI is rally-bred, but don’t attempt what Higgins and Drew pulled off at Sno* Drift Rally 2014.
Advertisement

The 2015 Subaru WRX STI has deep roots from its Rally heritage, but you don’t want to attempt what David Higgins and Craig Drew did this past weekend. They took their new WRX STI and pulled off some amazing driving with the performance rally car. While the new-generation 2015 WRX STI looks to be even better than the previous generation model, it takes a special driver, talents and skills to win at Rally racing.

With this win, Higgins extends an amazing streak of Rally America podiums to 19 in a row following the victory this past weekend. The new Subaru WRX STI he and co-driver Craig Drew pilot is the car to beat for sure this year again. Higgins is fighting for his fourth straight Rally America Championship this season. The car looks like it’s ready, but it takes a special driver to pull this off.

The Subaru car Higgins drives is modified for Rally racing to be sure, but just imagine taking the new 2015 Subaru WRX STI through over 130 miles of twisting, tree-lined, ice and snow covered roads in Northern Michigan as fast as you can push it. That’s what Higgins did to win the race. He drove the Subaru in frigid and windy conditions on roads that were a varied mix of snow and ice. The temperatures were in single digits and snow had fallen all weekend.

The cars are not allowed to have special tires, and it shows just how much skill and talent it takes to drive the Subaru WRX STI at Sno* Drift Rally. A huge challenge of racing on the roads that compose the Sno*Drift Rally are compounded by rules which prohibit studded or spiked competition ice tires. The traction on the race course is “fleeting” at best and Higgins' driving skills are magnified even more.

Sno* Drift Rally brings out many cars and drivers who think they have the skills to tame the snow covered roads in Northern Michigan near the towns of Atlanta and Lewiston. But the course quickly reveals who is a contender and who is a pretender. Even though Subaru produces a great WRX STI that is rally-bred, even with modifications, it takes more than a great car to win at Rally racing.

What happened on stage four of the race shows just how skilled Higgins really is. After preparing for the fourth stage, the hood pins were not properly latched. When the #75 2014 Subaru WRX STI launched down Stage 4, (McCormick Lake 7.21 miles), the hood immediately opened covering their view and smashing the WRX STI windshield. They should have been done on this stage after the disaster.

With over seven miles to go and his view completely obstructed, Higgins didn’t pull over and give up. The driver who has won the last three Rally America titles, slouched down into the seat so he could see under the hood. He was also able to see out the side window. It was an amazing driving effort.

So if you want to try your hand at Rally racing, a Subaru would be a good car to have. Even though the all-new 2015 Subaru WRX STI is rally-bred and tested, it takes incredible skills to drive in these conditions and win.