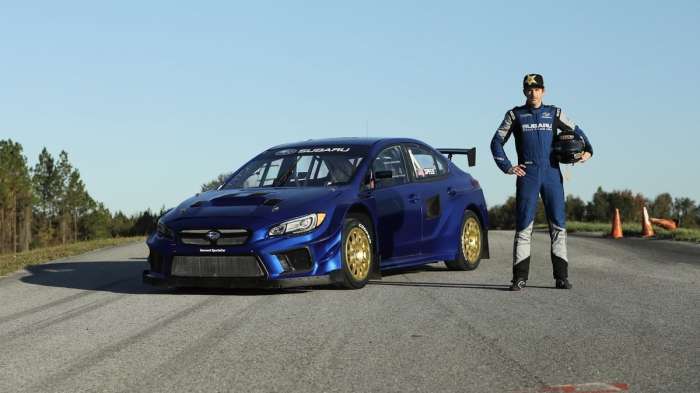 The Subaru WRX STI Supercars have been dominated by the Andretti Volkswagen Beetles since the inception of Rallycross but that could be changing. Subaru pulled off a real coup when Scott Speed chose to change from Andretti Autosport to pilot a new 2019 Subaru WRX STI VT19x rallycross car.

Subaru and Subaru Tecnica International along with Vermont SportsCar are giving Scott Speed, who has dominated Rallycross with four U.S. rallycross championship wins, a newly-upgraded 2019 Subaru WRX STI to drive. Subaru upgraded the outside with a new WR Blue, Yellow and Gold livery, but they also have been working on the drivetrain and chassis for the 2019 season.

Subaru hasn’t released any details on what they’ve been up to over the fall and winter, but they say they’ve made upgrades to the WRX STI VT 18x they ran with last year. They hope to end the Andretti team’s Volkswagen Beetle dominance. Now Scott Speed will be doing battle with his former teammate Tanner Foust in 2019 who still drives for Volkswagen.

Speed says, “I’m thrilled to be joining Subaru Motorsports for the next chapter in my rallycross career,” Speed said. “This team has made big strides in the past few years, and they have what it takes to win. I’m looking forward to defending my title, and racing alongside Patrik (Sandell) and Chris (Atkinson) to bring the team championship to Subaru!”

Speed will be introduced January 14 at the North American International Auto Show alongside his Vermont SportsCar-prepared WRX STI VT19x rallycross car. Can Scott Speed dominate the Andretti Volkswagen Beetles now? The ARX schedule has not been announced, but it’s shaping up to be an exciting season for Subaru. Stay tuned.