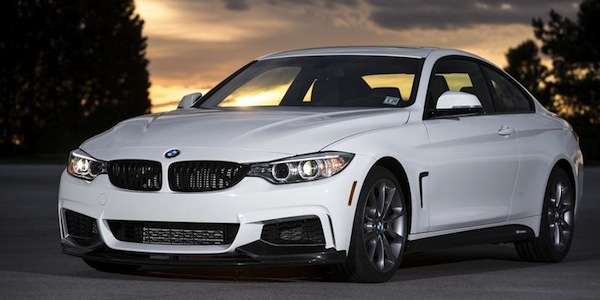 The 2016 BMW 435i ZHP Edition Coupe is coming for performance fans. How many will BMW ship to the U.S.?
Advertisement

BMW released details for a new 2016 BMW 435i ZHP Coupe Edition that pays tribute to the iconic ZHP Performance Package for the 2003-2006 E46 3 Series. ZHP was the original option code created by BMW Individual for that performance car. It’s coming back in only 100 special edition limited examples in the 2016 435i ZHP Edition Coupe.

It starts underneath with a Track Handling Package which features 18” Orbit Grey V-Spoke Wheels and M Sport Brakes with 4 piston fixed front and 2 piston fixed rear calipers. The suspension comes with variable damper technology as well as Variable Sport Steering.

The 435i ZHP Edition Coupe also gets a BMW M Performance Limited Slip Differential that uses 3 clutch plates for a total of 30 percent lockup on acceleration and 9 percent lockup on deceleration. BMW says it will give the performance driver the greatest amount of grip for better traction out of tight corners. It’s designed for maximum traction in spirited driving and track situations.

The new 435i ZHP Coupe Edition is quicker and comes with more precise handling for performance enthusiasts. Exclusive chassis, aerodynamic, cockpit and powertrain components are found throughout the ultra exclusive coupe. The ZHP will be available through selected BMW M Centers with production starting in July. Pricing on the new 2016 BMW 435i ZHP Edition will be announced closer to dealer launch.