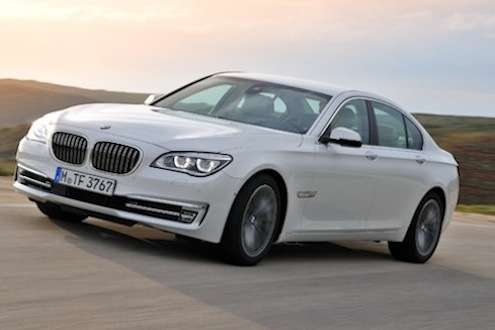 BMW is looking to expand their high-performance M brand and a senior BMW executive has said an M7 is a good possibility.
Advertisement

A senior BMW executive told The Detroit Bureau that BMW is looking to expand its high-performance brand-within-a-brand and the 7-Series will likely see an M badge in the future. BMW now offers M versions on more than half of its lineup and according to Ludwig Willisch, CEO of the brands North American sales subsidiary, an M7 model and others could be on the way.

While the company isn't officially committing to an M7, Willisch who was the former head of the high-performance division, seems to be optimistic about the chances. The German executive who was in Santa Barbara for the first U.S. media drive of BMW’s new M6 and Gran Coupe models, is pressing corporate headquarters in Munich to add an M7 model to the lineup.

Sentiment within the company seems to be changing especially with Willisch’s counterpart in China also lending his support. “I think we will get it,” said Willisch, though he didn’t offer a timetable. And there is no guarantee we will see the M7 here in the U.S., but the CEO of BMW North America seems optimistic about our chances. With Mercedes-Benz offering their full-size AMG luxury sports sedans and Audi has the S division, its surprising that BMW hasn’t committed to an M7 before now.

It looks like the M7 may not be the only new model coming in the high-performance M lineup. Recent trademark filings by the German automaker reveal that they have a few more models in the works. Companies trademark various monikers to protect their intellectual property but of course it doesn’t guarantee they will use them. But it does give us a good idea of future model developments.

BMW has recently filed a series of E fillings from E1-E9, i1-i9, X2, X4, M1, M2, M7, M10 and various M Sport models which tell us the German automaker may have plans to expand the M lineup and could have a lot more powerplants they are developing.

The M10 filing poses some interesting questions. Is BMW planning on developing a unique sports car to compete with the Audi R8 and the Mercedes-Benz SLS AMG? While BMW is not saying whether such a sports car is the works, with all the new filings, it appears the brand is looking to expand its high-performance lineup.

BMW looking at extensive use of carbon fiber

The report also said that BMW is looking to make extensive use of carbon fiber to reduce weight in the new models. The strong and lightweight carbon fiber will allow all of the BMW models to maximize performance and fuel-economy and to meet new regulatory requirements. Willisch said BMW is investing heavily in the development of carbon fiber hoping to bring down its cost. He hinted that BMW is making significant advances in reducing the complexity of the manufacturing process.

While no timetable has been set for expanding the M lineup, we may have to wait until the next-generation 7-Series before the we see the M7.