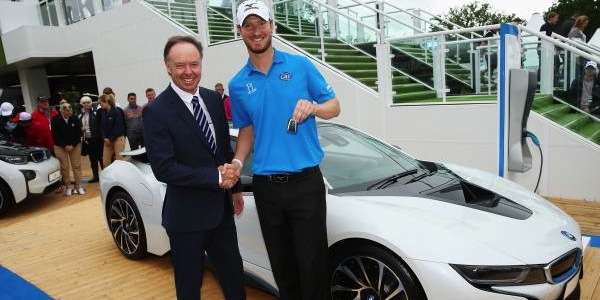 BMW gave away a 2015 M4 Coupe and a i8 sports car this week at the BMW PGA Championship. Has this ever happened before?
Advertisement

BMW gave away a new 2015 i8 sports car to Chris Wood and Andrew Johnston won a performance BMW M4 this week. Both got a hole in one at the BMW PGA Championship and walked away with new BMWs.

Englishman Chris Wood’s hole-in-one at the 14th hole of the final round scooped him the most desired of prizes, a stunning $163,000 BMW i8 that he could not resist sitting in before heading to the green to retrieve his ball. 26 year old Andrew Johnston also hit a hole in one on the 10th hole and got a new BMW M4 from the German automaker.

Wood, who finished fourth in the tournament, said: “When we have a practice round we look at the car and think, ‘Wouldn’t it be nice, a BMW i8?’ You never think it’s going to happen to you. I hit a great shot, a 7-iron (from 160m) and there was a delayed reaction because there were two cheers. One sounded like it had just missed and the second one told me it had gone in.”

A first ever for BMW

BMW who does this every year, has never given away a car prior to this year to a golfer for landing an ace at a par-three at the BMW PGA Championship. This year, two players achieved the feat. Both Wood and Johnson drove away in new BMWs.

Johnston, who holds the 68th spot on the Race to Dubai rankings as a professional golfer, had another hole in one at last year’s Scottish Open, and waked away after that one with...read more.

The BMW PGA Championship saw five holes-in-one recorded during the week, including one from the evergreen Jimenez, whose ace at the 2nd hole of his third round was his third of the season and the tenth of his European Tour career, a tour record. The 2nd hole unfortunately did not come with a new BMW as a prize, or three cars would have been given away.

LG's New EV Battery Plant Is a Welcome News for Tesla
Tesla Giga Berlin's New Hurdle: It's Not Only the Gov't, but Now Tesla Itself
END_OF_DOCUMENT_TOKEN_TO_BE_REPLACED