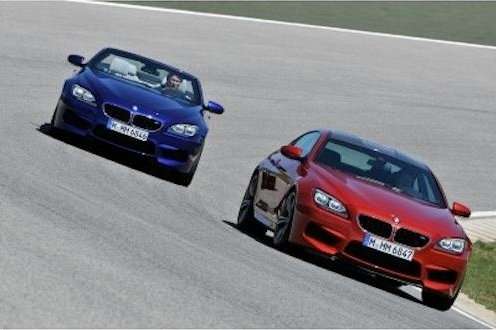 BMW accelerates the dream with the 2013 M6 Coupe and Convertible

The 2013 BMW M6 Coupe and Convertible combine luxury, performance and technology in an alluring package.
Advertisement

If you are a fan of high-performance vehicles, it’s a good time to be alive. Many of the major car makers are involved in racing and use that experience to bring new performance technology to their performance divisions. All this know-how eventually finds its way to production models like the 2013 BMW M6 Coupe and Convertible models. BMW has released a press release today detailing all the new technology and driving dynamics that improve upon the hallmark M vehicles we have come to know and love.

It starts with the Coupe getting a new carbon fibre-reinforced plastic roof to reduce weight. The new 2013 BMW M6 is one of the most visually appealing cars on the planet with its elegant yet masculine lines. But it’s underneath that beautiful exterior that gets M6 buyers excited.

New M6 gets a significant increase in power and efficiency

The 2013 M6 models get a 10 percent horsepower increase and maximum torque has been bumped 30 per cent higher than predecessor M6 models. The 4.4-liter V8 engine uses Twin Scroll Twin Turbos, cross-bank exhaust manifold, High Precision Direct Petrol Injection and fully variable valve control. The new 2013 M6 V8 engine produces 560 horsepower and 502 lb-ft of torque. On the track, the M6 will accelerate from 0–62 mph in 4.2 seconds (BMW M6 Coupe) or 4.3 seconds in the heavier BMW M6 Convertible. The M6 has an electronically governed top speed of 155 mph or 189 mph with M Driver’s Package.

Even with the increase in horsepower, the 2013 M6 sees improved performance in fuel-efficiency with fuel consumption of the respective predecessor models cut by more than 30 per cent. The improvement comes from the use of Auto Start-Stop function and comes standard on both the Coupe and Convertible.

Power is sent to the rear wheels via a seven-speed M Double Clutch Transmission that uses an automatic gear selection tuned to deliver optimum traction under all driving situations. Inside the M6 gets a M leather steering wheel with gearshift paddles. The M6 also comes with Launch Control and Low-Speed Assistance.

The chassis gets M-specific Dynamic Damper Control as standard and stability control and M Servotronic steering for maximum control. The 2013 M6 models get a new lightweight compound high-performance braking system; available as an option are newly developed M carbon-ceramic brakes with optimum resistance to fade and wear, and lower weight.

Aerodynamic features on the outside

The interior of the M6 also gets some new features for the 2013 model year. The new M6 comes with a newly developed M double-spoke leather steering wheel, M gear selector and car set-up controls on the model-specific center console. The M sports seats are wrapped in Merino leather upholstery for maximum comfort at any speed.

Technology abounds on the new M6