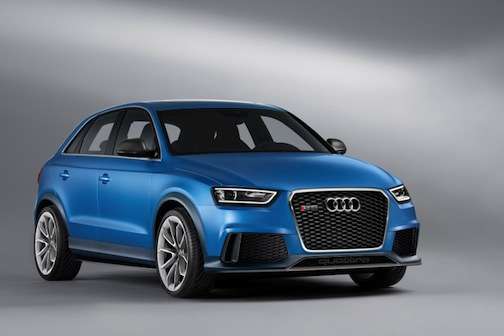 Audi has released the first images and details of the RS Q3 concept, their performance version of its Q3 compact crossover, just ahead of this years Beijing Auto Show. Audi wasted no time in confirming the RS Q3 concept will feature a 360 horsepower turbocharged engine that will make the concept a high-performance crossover.

Audi is calling the RS Q3 concept an “interpretation of a high-performance athlete with a 360-hp engine.” We will interpret that to mean the RS Q3 will deliver plenty of power to the wheels of the Audi RS Q3 to perform on dry roads better than your average grocery hauler.

The RS Q3 will be powered by a turbocharged 2.5-liter five-cylinder gasoline engine using the latest direct-injection technology and it’s coupled to a seven-speed S tronic gearbox. The 2.5-liter turbo will produce 360 horsepower and use Audi’s quattro permanent all-wheel drive to keep all that power going to four wheels. Audi claims 0-60 acceleration takes less than 5.2 seconds. The RS Q3 can reach a top speed of 165 mph. Now that will help you get those errands done quickly.

The turbocharged 2.5-liter, five-cylinder engine’s 360 horses parallel the output of the same performance engine in the TT RS. As any gear-head knows, when you pop the hood of the RS Q3, the styling of the engine compartment needs to match the same high-performance attitude. Audi performs here too by using layered-carbon trim panels around the engine compartment and red valve covers bolted to the cylinder heads. Audi has even marked the cylinder numbers on the spark plug covers, a practice used in auto racing. The use of aluminum on the high-flow air filter and the stainless steel air tube round out the stylish engine compartment.

Outside, the RS Q3 has been lowered about an inch from the production Q3 and rides on 20-inch high-gloss alloy rims fitted with 255/30R20 tires. Audi says the tire selection is “not exactly typical for an SUV, but certainly fitting for an RS model.” In the rear, the exhaust exits through two large RS-style elliptical tailpipes using new diffuser inserts below the rear bumper.

Audi didn’t forget the same details on the inside by using what they call a “cool black” on the roofliner, carpet, floor mats, and leather-upholstered instrument panel. Performance RS Q3 badges can be found on the instrument cluster, seatbacks, doorsill plates, and floor mats.

The RS Q3 isn't your typical SUV, but as Porsche and Land Rover have found out with the Cayenne and Evoque, buyers aren't looking for typical anymore. Audi hasn't announced production plans for its RS Q3, but there is a strong possibility that it will be offered in the U.S now that the regular Q3 has been confirmed. The 2012 Beijing Auto Show begins on April 23.