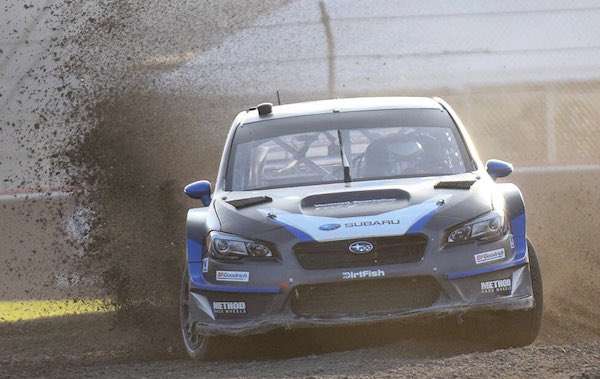 The Subaru WRX STI GRC Supercars made progress early at the Canadian Global Rallycross event, but failed to make the podium in the Final.
Advertisement

The 600hp Subaru rallycross machines consistently finished out front during heat races. Patrik Sandell in the #18 WRX STI earned P2 during Heat 1A and 2A, and Chris Atkinson in the #55 STI took P1 During Heat 3A.

Subaru Rally Team USA is trying to compete with the Volkswagen Beetles, Ford Fiesta ST and Honda Civics, but Chris Atkinson could only manage a fourth place finish in the 10-lap Final. Patrik Sandell was forced into a tire barrier which damaged the car and forced him to retire from competition. Atkinson Tweeted out after the race, “P4 in the final! Really happy with today's result!”

Sandell who has struggled, is hoping to get his first podium in a WRX STI this weekend. He says, “The track looks really good, super fast on the asphalt, and technical on the dirt. For me that is the best combination on a rallycross track. I definitely would like to get my first podium with Subaru this weekend.”

The domination of the Andretti Beetles is slipping. It was a battle between Tanner Foust's Volkswagen Beetle and Steve Arpin's Ford Fiesta ST in the Final. Arpin's Fiesta ST wins again in the Final ahead of Foust who waited to take the Joker on the final lap but still couldn’t catch Arpin. Foust finished second and Mitchell deJong took third place to round out the podium. Arpin who is from Canada, takes the point lead in the driver championship who is now ahead of Foust by four points. Scott Speed slipped to fourth in the standings.

Racing action at the Canadian Aviation and Space Museum in Ottawa continues today (Sunday) in Round Five of the 2017 Red Bull Global Rallycross Championship. Can the Subaru WRX STI Supercars get on the podium? Stay tuned.

Panasonic Updates Profit Forecast, Noting How Much Tesla Batteries Help The Jump
2022 Porsche 911 GT3 Laps Nurburgring in 7:04 With Journalist Behind The Wheel
END_OF_DOCUMENT_TOKEN_TO_BE_REPLACED