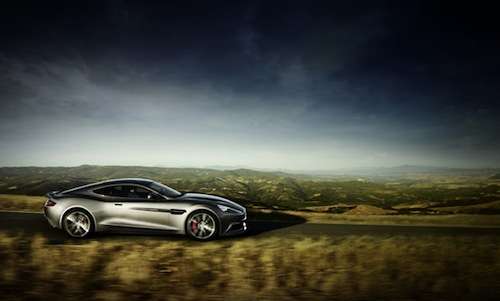 Aston Martin Vanquish like its never been seen before [w/videos]

Aston Martin has released four new videos of the Vanquish super grand tourer and reveals the supercar in a whole new light.
Advertisement

The new Aston Martin Vanquish could be the most photogenic car on the planet and the British automaker has just released four videos of the supercar being photographed by Rene Staud and his world renowned team. They have taken the super grand tourer to Italy for an amazing backdrop to capture the two-door beauty. The first video called “In Motion” catches the sounds and sights of the Vanquish as it races through the Italian landscape.

Aston Martin says the new super grand tourer “is everything we know expressed in one exceptional car.” The new Vanquish is certainly a new breed of supercar and is worth being photographed by Staud and his experienced staff. In the second video we see the new Vanquish in “The making of the Photo Shoot” in Stuttgart Germany where Staud’s studio is located. We can see why Aston Martin has chosen Staud to do the photo shoot as he and his team are obviously pros at shooting cars.

The Aston Martin Vanquish is taken to Italy for the next two photo shoots. The first being in Padua Italy where the sports car is taken to the historic center with its unique buildings, bridges and narrow streets. The Staud photographers are enjoying their work immensely as they catch the car in day and night settings. Markus Kramer, who is the Global Marketing Director for Aston Martin, is there to oversee that the Vanquish is seen in its proper light.

Finally the amazing car is taken to Tuscany, Italy for the final shoot on the highest mountains roads of the beautiful region. The team stages the high-performance car and gets some amazing shots of the Vanquish. The V12 565 horsepower car is taken through the countryside and displays why it is the most potent model in Aston Martin’s lineup.

The Vanquish will sprint from 0-62 mph in 4.1 seconds and has a top speed of 183 mph giving the new Vanquish true supercar status. Aston Martin CEO, Dr. Ulrich Bez sums it up pretty well when he says, “Today’s Vanquish is the ultimate expression of Aston Martin design ethos, engineering innovation and technical ability. It offers luxurious, continental-crossing capabilioty and pure driving excitement without compromise.”

The new Aston Martin Vanquish sports car will initially only be available in the UK and Europe late in 2012 with a sticker price of approximately $297,828. The U.S. launch has not yet been announced.

Check out the four Aston Martin Vanquish videos below and see it like its never been seen before.

Tesla Contemplates A New Strategy for China Retail even As Sales Boom
Jay Leno on Elon Musk & EVs: “I Think He Should Get ... Credit"
END_OF_DOCUMENT_TOKEN_TO_BE_REPLACED