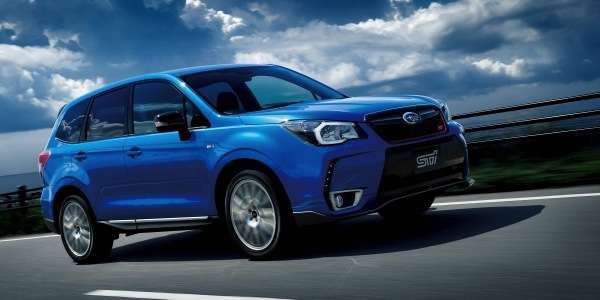 Subaru launches the new STI-developed 2015 Forester tS performance SUV. Will the U.S. and other global markets get left out again?
Advertisement

This special 2015 Subaru Forester tS offers all the goodies performance fans want on an SUV, but don’t expect it to be sold anywhere outside the Japan market. We knew it was coming and Subaru announced the new 2015 Forester tS is launching in Japan with some special equipment developed by Subaru Tecnica International (STI). This Forester tS gets more than just a few extra STI badges.

Subaru Tecnica International (STI) is the motorsports headquarters of Fuji Heavy Industries Ltd. and is the performance division for Subaru. STI has extensively tested the Forester STI Concept vehicle on tracks like the Nurburgring in Germany and their own test facility near Gunma Japan. The technology went into developing this new 2015 Forester tS that the Japanese automaker is launching today. Let’s take a look at what the new performance SUV features inside, outside and underneath.

The new Forster tS gets it’s own performance specs from STI. tS stands for tuned by STI and the performance division has given it some nice upgrades. STI wanted the new Forester tS to be able to handle the normal conditions on the road that drivers will experience and still give it true performance driving dynamics. STI says, “This is a complete STI car that was thoroughly pursued.”

This special Forester sits 15mm lower than the regular SUV and gets a special STI suspension setup and tuning for performance driving dynamics. Underneath it features 19-in BBS aluminum wheels wrapped in 245/45R19 Turanza ER33 performance tires, 17-in ventilated Brembo disc brakes both front and rear with red STI logo, a track-tested STI-tuned suspension, flexible tower bar, draw stiffeners both front and rear, a flexible support sub-frame in the rear, dedicated ECU unit, dedicated TCU transmission control unit and a oil cooler for the 8-step CVT automatic. The CVT features an S # mode (Sport) on the SI-DRIVE for performance driving.

DONT MISS: New Forester STI has Nurburgring roots but don’t look for it in the U.S.

The new performance SUV will also come with Subaru’s newest-generation safety equipment called EyeSight. This safety system has earned global praise for its ability to prevent collisions in all Subaru-equipped vehicles. It will also feature a dedicated VDC (Vehicle Dynamics Control) system.