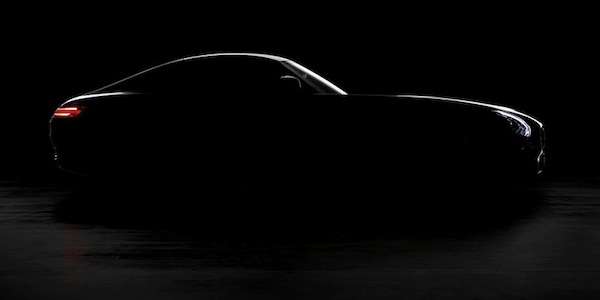 This fall, AMG's next high-performance vehicle will make its world debut: The 2015 Mercedes-AMG GT.
Advertisement

Mercedes-AMG is never standing still and this is their second fully independently developed performance vehicle following the SLS AMG. We’ve seen images of the ultra-dynamic interior, and now we have our first glimpse of the exterior of the high-performance 2015 Mercedes-AMG GT. The video below shows what we can expect from the next performance machine from Affalterbach.

When will we finally see the new Mercedes-AMG GT? Mercedes says the new AMG performance car will make its world premiere this fall. AMG will likely build the most dynamic driving vehicle we have ever seen. It could be a direct competitor for the highly successful Porsche 911.

The current 2014 SLS AMG GT uses a 6.3-liter V8 engine that produces 591 horsepower (435 kW). The new AMG GT is reported to be powered by a smaller twin-turbo 4.0-liter V8 in either 485 hp (357 kW) or 550 hp (404 kW) versions. This would compete well against the Porsche 911 turbo with the turbocharged 3.8-liter six-cylinder engine with direct fuel injection and 520 horsepower. The higher-powered variant could take on the Porsche Turbo S with the 560 hp twin-turbo powerplant.

AMG says the new sports car will create a new segment for the performance brand. Tobias Moers, CEO of Mercedes-AMG GmbH says, "The new Mercedes-AMG GT shows that we will be positioning AMG more vehemently and aggressively than to date as a dynamic sports car brand."

We already know the cabin of the AMG GT will come with a cockpit that features a central "aviation design" theme which is typical of Mercedes-Benz sports cars. Mercedes wanted to put the emphasis on the width of the dashboard which creates an impression of a powerful wing.

The dominant center console presents a dynamic character “reminiscent of a NACA air intake and the employed materials suggest that it has been adopted directly from motor racing.” But the most clever design from AMG is the unique controls on the AMG drive unit which are arranged like eight cylinders in a V layout. It definitely makes a powerful statement. You can see the new cabin in the link below.

The all-new 2015 Mercedes-AMG GT is moving performance cars into a new era. AMG will likely produce a car that is most dynamic car in terms of driving dynamics, agility and sportiness. AMG knows how to create vehicles “that beg to be driven.”

Watch The Mercedes-AMG GT: This is What You Get video.