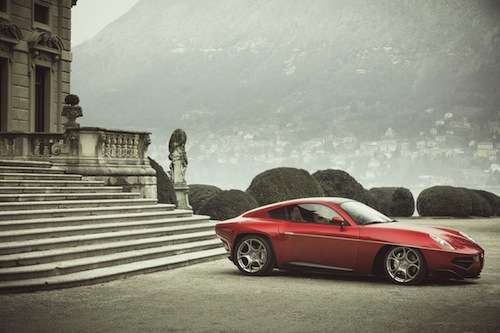 The audience at the Concours d'Elegance Villa d'Este saw visions of 1952 and has awarded the new Alfa Romeo Disco Volante by Touring the most attractive car award.
Advertisement

The Alfa Romeo Disco Volante by Touring has designs of both the past and future, and fans at the Concours d'Elegance Villa d'Este liked what they saw this weekend. It’s a performance car that is built on the basis of the Alfa Romeo 8C Competizione but also has lines that recall the 1952 Alfa Romeo 1900 C52 designed by the same atelier in Milan. The sports car wins the “Design Award for Concept Cars & Prototypes” and comes away with the most attractive car award. Did fans have visions of 1952 when they saw the two-seat sports car?

The Concours d'Elegance Villa d'Este is a prestigious event that crowns the best classic cars in the world, as well as reward the most fascinating prototypes in the world. The event was held in Como, Italy on May 24 this past weekend. The Alfa Romeo Disco Volante by Touring walks away with the "Concept Car and Prototypes" and is a two-seat coupe built by hand by the atelier in Milan on the basis of the Alfa Romeo 8C Competizione with which it shares the same chassis and engine.

Produced on demand with over 4,000 hours of labor

The unique sports car uses the most advanced materials like carbon fiber and aluminum to keep the car light. Each example requires over 4000 hours of highly skilled labor, and Alfa Romeo says is built only on demand. The car at the show was numbered 01, with two more about to be completed by the Italian automaker.

The car pays homage to the iconic Alfa Romeo 1900 C52 "Disco Volante", coupe which this year celebrates its 60th anniversary. Designed by Carrozzeria Touring in 1952, the C52 was lightweight, aerodynamic and was wildly popular earning the nickname “Flying Saucer”.

The two-seat sports car not only looks good, but it’s also fast. The performance car uses the same power of the Alfa Romeo 8C Competizione. The engine is a 4.7-liter V8 with 450 hp and 480Nm of torque. It’s mated to a sequential six-speed electro-controlled palette gearbox with a limited slip differential and large ventilated disc brakes for stopping power. The Alfa Romeo Disco Volante by Touring sprints from 0 to 100 km / h in 4.2 seconds and reaches 290 km / h.

The Alfa Romeo Disco Volante by Touring also uses the same chassis as the Alfa Romeo 8C Competizione. It is rigid, lightweight and is perfect for the high-performance car. The sports car utilizes a mid-front engine, transaxle and rear-wheel drive configuration. The weight distribution is a key factor in optimal performance and has a load distribution between front and rear of 49-51%. The suspension features double wishbones with arms and hubs in forged aluminum and supplementary strut for the rear toe-in control. This high-performance sports car is definitely built for the curves and the track.

This is the second time in a row that Alfa Romeo wins the prestigious ' Design Award for Concept Cars & Prototypes' of the Concours d'Elegance Villa d'Este. Last year, the newly launched Alfa Romeo 4C was given the most attractive car award. This year Alfa Romeo walks away with another trophy with the high-performance Alfa Romeo Disco Volante by Touring.