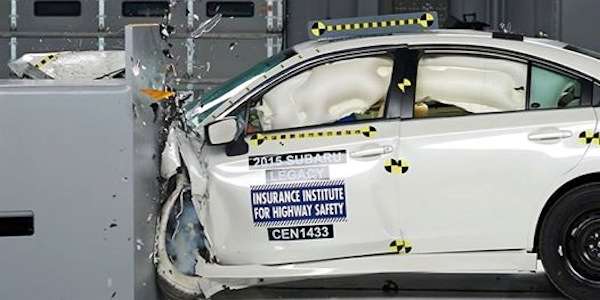 The 2015 Subaru Legacy and 2015 Outback shine in IIHS small overlap test earning more top safety awards. How do they keep doing it?
Advertisement

Subaru loves to get their cars smashed into solid steel barriers that don’t move an inch on impact. That’s what the IIHS just did to the 2015 Subaru Legacy sedan and 2015 Outback wagon. The two newest Subaru’s shined in IIHS’s small overlap test earning Top Safety Pick and TSP plus awards. Subaru has more 2014 IIHS Top Safety Pick awards than any other brand. Subaru is the only manufacturer with IIHS Top Safety Picks for all models for five consecutive years (2010-2014). How do they do it?

All seven Subarus are TSPs

This is no easy task, but Subaru has been committed to safety since the 60s when they began conducting their own tests long before there was any official testing being conducted. And beginning with their 2014 models, Subaru improved occupant protection in small overlap crashes by improving all of their 2014 models structurally. For Subaru, it all starts during the design phase.

Better protection in the structure

Since 2014, all Subaru models have been enhanced even more to provide better protection in the structure increasing cabin rigidity and absorbing impact energy from any direction. This is the design that gives the superior protection that enables all their vehicles to keep achieving these safety awards year after year.

It starts with the design

The high safety targets are designed into their vehicles before they ever reach production. The safety targets are set first, and then the design team uses computers to conduct impact simulations. Those results are then incorporated into the new design. Real-world impact simulations are then conducted in Subaru’s own test facility. Hundreds of new 2015 Subaru Legacy and 2015 Outback test mules were smashed before the vehicles ever reached production. And Subaru even goes beyond what is expected from the various national safety tests around the world.

The previous generation Legacy was also a TSP plus winner, earning an acceptable rating overall in the small overlap front test. But Subaru wasn’t satisfied and improved the new-generation 2015 Legacy sedans safety even more. Subaru engineers improved the structural performance in the current generation model. Ratings for restraints, dummy kinematics as well as injury measures for the head and neck, chest, pelvis, legs and feet all ranked higher, achieving a good status.

Consumers can be confident in purchasing any of Subaru’s 7 models. BRZ, Impreza, WRX/STI, XV Crosstrek, Forester, Legacy and Outback models are all IIHS Top Safety Picks and consumers can know they are driving one of the safest cars on the road. The 2015 Subaru Legacy sedan and 2015 Outback are just two of the latest examples.