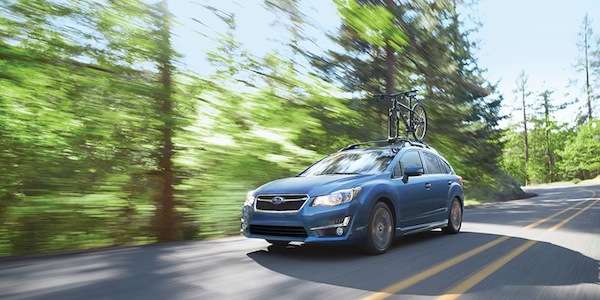 Pricing for the newly redesigned 2015 Subaru Impreza starts at $18,195. Here’s 7 new features to look for on the new Impreza.
Advertisement

The newly-revised 2015 Subaru Impreza isn’t a total makeover, but the new compact model gets styling revisions on the outside, drivetrain upgrades underneath and new technology on the inside. Subaru has announced pricing on the new 2015 Impreza and it gets a $300 increase over the outgoing model. What will consumers get for the extra increase?

2015 Subaru Impreza sedan pricing begins at $18,195. Impreza 5-door hatch pricing starts at $18,695. The new model gets 7 new upgrades for the new model year and some are significant. For 2015 Impreza gets refreshed with a number of new things that make it a good value for compact shoppers. What hasn’t changed on Impreza is the 148-hp 2.0-liter Subaru Boxer engine. Subaru will likely change over to their new engine technology with direct injection, lean-burn technology and cylinder deactivation in 2016. Impreza still comes standard with Symmetrical all-wheel drive, and that’s a good thing.

For 2015, Impreza gets revised front styling with a new front bumper, grille and headlights. It also features new exterior mirrors that enhance aerodynamics and help improve fuel mileage, as does a low-profile trunk spoiler on all 4-door models. The 2015 sedans also feature LEDs for the center high mounted stop lamp.

Subaru has revised the Lineartronic CVT automatic transmission and it’s now standard on the Premium and Limited trims. Subaru engineers revised the automatic Lineartronic CVT that is optional on the Impreza and now features a revised shift logic for a more natural stepped shift pattern. This is a significant upgrade over the previous generation model. Impreza still comes with a 5-speed manual as standard in the base 2.0i and the Sport Premium trims.

The 2015 Impreza gets a new Rear Vision Camera safety feature that is now standard across the Impreza lineup. This is part of the new infotainment system that includes a new 6.2-inch multi-function touch screen display with single-touch gesture control. This new feature will make it easier for the driver when backing out of tight parking areas and seeing blind spots.

The 2015 Impreza gets numerous upgrades for a quieter ride and a quick-ratio electric power assisted steering that enhances handling agility. Impreza uses liquid (hydraulic) engine mounts on models with the CVT that help to dampen vibration for a quieter and smoother ride. The double-wishbone rear suspension features pillow ball bushings for improved ride comfort, straight-line stability and handling agility.

The 2015 Impreza now offers the latest version of the EyeSight driver-assist system. EyeSight includes new technology like Adaptive Cruise Control, Pre-Collision Braking and Vehicle Lane Departure Warning. These systems are already available on the new 2015 Legacy sedan, Outback crossover and Forester SUV. The optional EyeSight system will now be available on 2.0i Limited 4-door and 2.0i Sport Limited Imprezas. EyeSight is the highest-rated front crash prevention system by the Insurance Institute for Highway Safety (IIHS).

The 2015 Impreza gets improved fuel economy of 1 mpg, and offers the highest fuel economy of any gasoline All-Wheel Drive car offered in the U.S. It has an EPA estimated rating of 28/37 mpg city/highway and 31 mpg combined for models with the Lineartronic continuously variable transmission (CVT). These numbers are comparable with front-wheel drive cars.

The 2015 Subaru Impreza gets a $300 price increase but comes with 7 new upgrades for the newly redesigned sedan and 5-door hatch. Look for the new models to arrive at Subaru dealers in late November. You can see the new Impreza in action here.