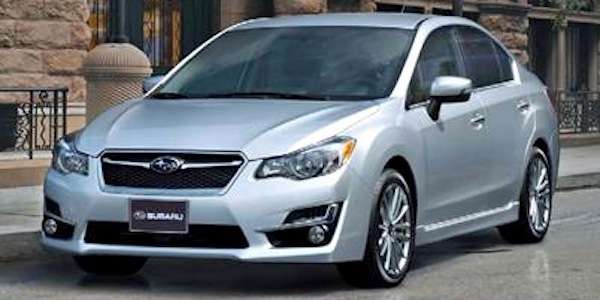 To boost fuel efficiency on the new 2015 Impreza, Subaru pulled out all the stops. Here’s 5 ways they went all-out to do it.
Advertisement

To boost fuel efficiency on the new 2015 Impreza sedan and five-door, Subaru has gone all out. Subaru just introduced the all-new 2015 Impreza, and they improved fuel mileage on the all-wheel-drive compact. It may be by only one mpg, but it’s not easy to do on a compact car that features AWD. How did they do it?

For the new 2015 2.0i (AWD) Impreza model, Subaru estimates highway fuel economy of 28/37 city/highway mpg. The outgoing 2014 model achieved an EPA 27/36 city/highway. The 2015 Impreza offers improved fuel economy, strengthening its position as offering the highest fuel economy of any gasoline All-Wheel Drive car offered in the U.S. Its EPA estimated ratings of up to 28 mpg city / 37 mpg highway and 31 mpg combined for models with the Lineartronic continuously variable transmission (CVT) are comparable with the competitions front-wheel drive cars.

All 2015 Impreza models are powered by a 148-hp 2.0-liter Subaru Boxer engine and feature standard Symmetrical All-Wheel Drive. For 2015, the Lineartronic CVT is now standard for the Premium and Limited trims and it has been tuned to provide a more natural stepped shift pattern which helps improve fuel mileage. A 5-speed manual continues as standard in the base 2.0i and the Sport Premium trims.

Impreza gets a stiffer, redesigned transmission components and a wider gear ratio that deliver improved environmental friendliness and drivability. The D range of the transmission has been configured to utilize a continuously variable shifting mode under light acceleration and change to a stepped shifting mode under heavy acceleration. This also contributes to better mileage under differing driving situations.

Another way Subaru engineers improved Impreza mileage is by minimizing internal engine friction. They were able to do this without affecting driving performance of the Symmetrical AWD (All-Wheel Drive) system with the Boxer engine at its core. These steps to reduce friction caused by internal engine components have helped place the Impreza at the top in terms of fuel economy for AWD passenger cars on the US market.

New for the 2015 model year, all Subaru Imprezas will be equipped with Partial Zero-Emission Vehicle (PZEV) rated 2.0-liter Subaru Boxer engines that are more fuel efficient and better for the environment. PZEV equipped vehicles produce zero evaporative emissions, offering cleaner emissions and helps squeeze out the most of every drop of fuel.

Two other technologies that help boost fuel efficiency in the new 2015 Impreza include electric power assist steering (now with a quicker ratio for 2015), along with low rolling resistance tires. An ECO gauge in the instrument panel helps drivers see what’s going on inside the powertrain and encourages more economical driving.

The new 2015 Subaru Impreza promises to be one of the most fuel efficient compact cars in the segment, especially when noting its All-Wheel Drive drivetrain compared to the competition. The new-generation Impreza will begin production in the U.S. at their Indiana plant. The new Impreza will be available in U.S. showrooms later this year. See it in action here.

Lee wrote on September 27, 2014 - 4:17pm Permalink
The reduced internal friction means that you will pay more for oil changes. 0W-20 synthetic motor oil at every 7500 miles. Every 3000 miles if your engine has a turbo.
Ravenna wrote on November 25, 2014 - 1:38am Permalink
A gallon of Subaru brand synthetic 0w-20 can be had for $30, so that is not really a factor in total cost of ownership.
Carlton Gayle wrote on March 10, 2016 - 7:26am Permalink
Want to know how to prevent my 2012 2.0i limited impreza from constantly skipping or jumping up in gears when in s mode makes the car feels dum when it does that