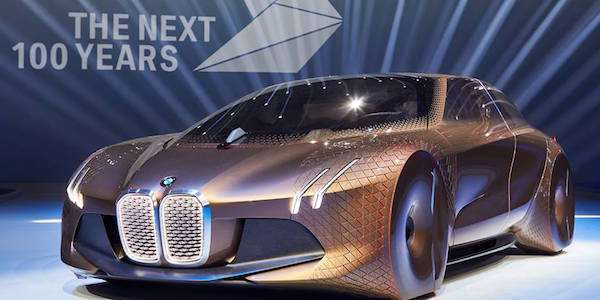 4 Innovations to Look For On BMW Vehicles Of the Future

It’s called the BMW VISION NEXT 100 vehicle. BMW says it reveals 4 things to look for on future vehicles.
Advertisement

To commemorate the 100 year anniversary of the BMW Group, the Bavarian automaker announced the BMW VISION NEXT 100 yesterday. It’s the car that will take them to the next 100 years of innovation and mobility. Here’s 4 innovations that consumers can expect to see on BMW vehicles of the future.

Building driver-focused cars isn’t new and it’s what put BMW on the map. Autonomous driving will be new. BMW says their vehicles will remain driver focused in spite of the trend moving toward autonomous driving. The Bavarian automaker believes that BMW drivers will be able to let their cars do the work, “but only when the driver wants.” The BMW VISION NEXT 100 will continue to offer “an intense experience of Sheer Driving Pleasure” according to the press release.

BMW says, their future vehicles will be fully connected. They say, “Digital technology will become so normal that it will permeate almost every area of our lives.” Look for increasing digitalization in their future cars. BMW goes on to say, “Artificial intelligence will learn from us, anticipating many of our wishes and working away in the background to perform the jobs we delegate to it. The way humans and technologies interact will be transformed: screens and touchscreens will be replaced by more intuitive forms of human-machine communication and interaction. Better yet: technology will become more human.”

New manufacturing processes will be developed

New materials like carbon fiber are already being used, but new innovations are coming in manufacturing. New technologies like rapid manufacturing and 4D printing will produce not components or objects but intelligent, networked materials. BMW says they could soon replace conventional tools to open up new possibilities in design and engineering.

The emotional experience will be heightened

BMW knows that keeping driver engagement high is a key to their success. This won’t be changing in the future. What will change is the way they do it. BMW wants to increase the sensory experience even more. Moving into the future, BMW says the emotional experience of the BMW VISION NEXT 100 will be heightened in an unprecedented way. BMWs of the future will feature more new innovations and technologies that will blow our minds.