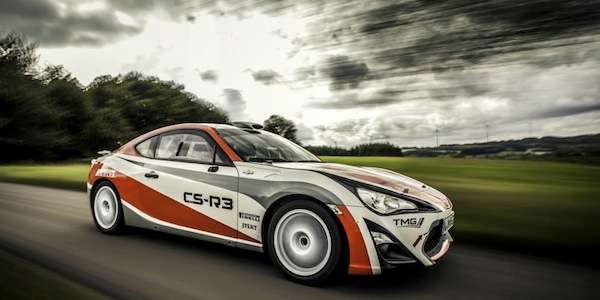 Toyota Motorsport GmbH has been testing the 250 hp 2015 Toyota GT86 CS-R3 and it’s about to be released for sale.
Advertisement

The 2015 Toyota GT86 CS-R3 rally car that made its public debut at ADAC Rallye Deutschland, will be available for performance fans soon. The Toyota GT86 CS-R3 will be offered for sale to private customers and Toyota dealerships in the global markets where GT86 is sold. Toyota Motorsport GmbH (TMG) has been testing the 250 hp GT86 CS-R3 in Germany to get it ready for production and release to the public. And it’s almost ready.

The rear-drive sports coupe has been under development by TMG for over a year and put the CS-R3 through its paces as a zero car on Rallye Deutschland, which took place around Trier, Germany, this year on August 21-24. The car did not compete but had an important role testing each stage to ensure safety.

The GT86 CS-R3 Rally Car conforms to the FIA’s R3 regulation, which allows modification of its 2.0-liter boxer engine. Changes to the software and hardware, such as cam lift and compression ratio, are part of an extensive development program and the final car is targeted to deliver 240-250 hp.

The sports coupe is designed to provide a cost-effective way for fans to enjoy the thrills of competitive rallying, from local events up to and including the WRC. That decision perfectly reflects the Toyota theme of 'fun to drive, again' whilst following the automaker’s enthusiasm for encouraging participation through grassroots motorsport initiatives.

Throughout the development process, TMG says they focused on reducing weight while still delivering safety, reliability and of course lots of fun. The GT86 rally car will feature a sequential shift six-speed transmission and limited slip rear differential and inside its fitted with an FIA-homologated safety cage designed for weight optimization. The rear-drive sports coupe will also come with a racing clutch, lightweight flywheel and JTEKT hydraulic power steering with short ratio.

TMG has also sourced tailor-made wiring looms and motorsport engine ECUs, while the car will feature market-leading tarmac and gravel suspension kits, including specifically-designed control arms. GT86 CS-R3 has already undergone extensive testing on various race conditions and surfaces to prepare for its dealer launch in 2015.

Toyota says the 2015 Toyota GT86 CS-R3 rally car will be available to customers in the first quarter of 2015 in kit form and TMG expects to offer a price comparable with other R3 models. The sports car just made another public appearance during the recent Wales Rally GB and TMG says development is progressing well. Pricing will be announced after confirmation of the final specifications.