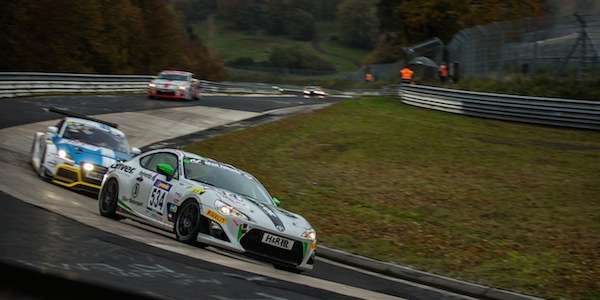 The Toyota GT86 CS-V3 sports car wins the TMG GT86 Cup 2014. Take a ride with TMG and experience the start from the driver's seat of their GT86 CS-V3 [video]
Advertisement

This was the final race in the VLN series (the ninth real race of the 2014 season due to cancellation of VLN 8), and this race was as exciting as any on the Nurburgring. After 26 minutes, the race had to be suspended due to fog, but after two hours the weather improved enough to allow a re-start. With just over three hours remaining, Hoffmeister and Wrabetz battled their Toyota GT86 CS-V3 car right from the start and after three laps, there was nothing between them.

Shortly after half way through the race, Hoffmeister and Wrabetz held a slight edge, but a yellow flag on the Dottinger Hohe did away with the lead. “We were stuck behind the factory Bentley, which was driving at a speed of only 40 instead of the allowed 60 kph,” said Uwe Isert, Dorr Motorsport’s team manager. “But all’s well that ends well.” After 18 laps, his car’s advantage over Vantage Motorsport was 29.476 seconds.“Winning a race to become the champion, that’s how it should be. We wanted to win the Cup without outside help and did it. I’m very, very happy,” said Isert.

The team was fast all season

Nico Ehlert, TMG’s Principal Engineer Customer Motorsport was one of the first to congratulate the two drivers, “Hoffmeister and Wrabetz deserve it. They were fast all season, made no mistakes and scored all the time.” Ehlert went on to say, “We had the idea of the Cup to have some real customer motorsport. After two years, it has certainly all paid off. In the first season, our customers first had to get to know us. Now they trust us and our work and know that we give our full support to all our teams wherever possible. That’s why I think the second season was even more successful than the first. Our teams’ satisfaction is reflected in the fact that many have already announced to be with us next season too, some even on an expanded basis.”

In the video below, you get to experience how it feels to start a VLN race against 150 competitors on the Nurburgring in the fog. Take a ride with TMG United and experience the start of VLN 10 from the driver's seat of their GT86 CS-V3 video