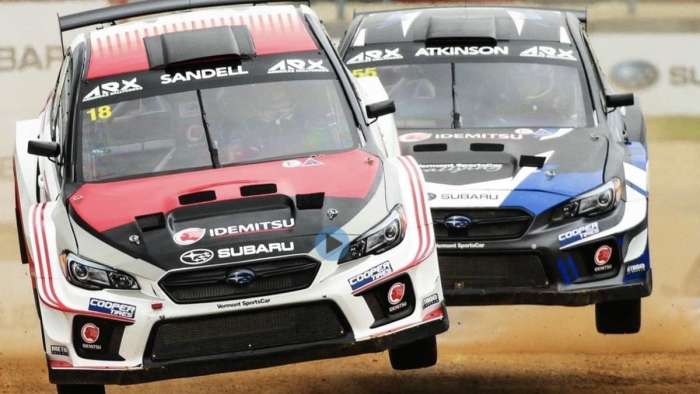 The 2019 motorsports year will bring new excitement. See why Subaru WRX STI fans have a lot to be excited about.
Advertisement

Subaru Motorsports fans haven’t had much to cheer about when it comes to rallycross the past few years. It’s been a struggle for Subaru to keep up with Tanner Foust and Scott Speed in the Volkswagen Beetles of the Andretti Autosports team. But 2019 is shaping up to be different.

The big news for 2019 Subaru motorsports is rallycross champ Scott Speed will be behind the wheel of a Subaru WRX STI Supercar in 2019. In a surprise move, Subaru announced 2018 Americas Rallycross (ARX) champion Scott Speed will move from Andretti Autosport’s Volkswagen team and join with Subaru Rally Team USA for the 2019 ARX season.

Scott Speed won’t be driving the familiar red Volkswagen Beetle anymore. Speed was this year’s ARX champion and Subaru and its fans are thrilled the top Rallycross driver has made the switch. Speed scored a pair of victories at the Circuit of The Americas and at the Grand Prix de Trois-Rivieres in Canada and secured the championship in a final-round title-decider. Scott Speed will now defend his title by racing a 2019 Subaru WRX STI for SRT USA.

At the announcement, Speed said, “I’m excited to officially announce my racing plans for the 2019 season. I’ve raced all over the world, Formula 1, NASCAR, Formula E, and a four-year rallycross championship run, including the inaugural ARX title this year, and I’m thrilled that the next chapter for me will be here in the U.S. with the Subaru team in the Americas Rallycross series.”

The 2019 ARX race schedule has not been announced, but we do know Mid-Ohio Sports Car Course will join the ARX Championship calendar for the 2019 season. The Cooper Tires ARX of Mid-Ohio will mark the first-ever Midwestern events for ARX as well as Mid-Ohio’s first rallycross events, June 8-9 and October 5-6, 2019. The ARX and ARX2 events will be held on a temporary 0.7-mile, 10-turn asphalt and dirt configuration with a jump constructed near the “Keyhole” section of Mid-Ohio. Watch the Cooper Tires ARX of Mid-Ohio announcement below.

STI fans have plenty to cheer about when it comes to the Japanese automaker's involvement in the Nurburgring 24-hour race. Subaru and Subaru Tecnica International (STI) want to win their sixth Nurburgring 24-hour race when it takes place at the Ring in June. They won the grueling day and night race last year, where they picked up their 5th class title and their third win in four years. Subaru and STI have already begun preparing the 2019 Subaru WRX STI for the race months in advance with testing at Fuji Motor Speedway late last year.

Subaru has taken the 2018 winning WRX STI NBR and will likely use the same chassis since there were no accidents last year to damage the performance race car. Hideki Yamauchi and Takuto Iguchi began testing the car for the purpose of making sure the cooling performance gets upgraded for the 2019 Nurburgring 24-hour race since the race will take place a month later (June 22-23) . Subaru also plans to refine aerodynamic performance, improve brake performance, optimize suspension geometry, incorporate proper gearbox ratio, and begin tire development for 2019.

It looks to be an exciting motorsports year in 2019 as the Subaru WRX STI continues its quest to win the Nurburgring 24-hour race for the sixth time and win an ARX, or any rallycross championship for the first time. Stay tuned.