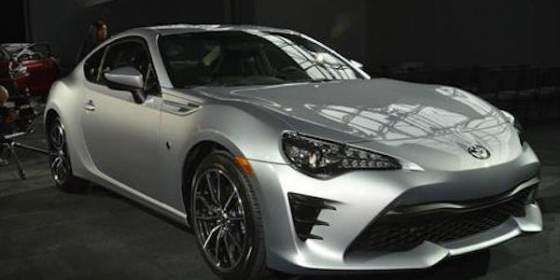 The Scion FR-S is now the 2017 Toyota 86 and it gets a minor refresh. It also gets a small price bump.
Advertisement

Toyota announced pricing on the 2017 Toyota 86 sports coupe and it’s about what you would expect for the refreshed rear-drive sports car. The Scion brand is gone as it makes the transition to Toyota. The FR-S in now the Toyota 86 and it’s priced at $26,255 when equipped with a six-speed manual gearbox. That’s a price bump of $950. The six-speed automatic model will increase $570, and starts at $26,975.

For the 2017 model year, the Toyota 86 gets a refresh with new exterior styling, changes to the interior, and also suspension and engine upgrades. The joint project from Subaru and Toyota produced a sports car that’s high on the fun-to-drive meter. The meter ramps up for the 86 coupe.

Subaru tweaked the 2.0-liter boxer engine and squeezed out an additional 5hp and another 5 lb. ft of torque from the naturally aspirated engine. No turbo model is available for the 2017 BRZ or the 86 sports coupe.

The additional horsepower comes at a cost in fuel mileage

The suspension received tweaks with the shocks re-tuned and it gets a spring rate change that Toyota says will enhance control of the sports coupe. On the 6-speed manual coupes, performance is improved through a gear ratio change.

High on the fun-to-drive meter

The 2016 Scion FR-S and BRZ rear-drive sport coupes were high on the fun-to-drive meter before, and the changes in power and suspension should ramp up the 2017 models even more. A 5hp bump doesn’t sound like much, but when it’s combined with more torque and suspension tweaks, it should make a difference in overall driving performance.