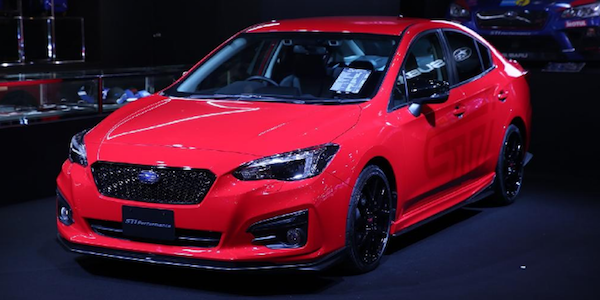 2017 Subaru Impreza STI Breaks Cover in Tokyo; Will it See Production, or is it Just Another Tease?

The Tokyo Auto Salon begins today and Subaru brings a number of STI-enhanced models including a new 2017 Impreza STI. Will it ever see production?
Advertisement

Will these concept vehicles ever make it to production? Subaru has a history of teasing fans with concept cars at these shows, and then not delivering production models. We also see many Japan-only performance models that never reach other global markets.

Subaru said they would bring out new production models enhanced by STI, and hopefully they deliver on that promise of their increased involvement beyond the race track. These show models, Impreza compact sedan, WRX S4, BRZ sports coupe and Levorg sports tourer, have all been upgraded by STI and feature performance upgrades for performance enthusiasts. The Impreza STI Sport Concept isn't a WRX STI, but it's a start.

The new 2017 Impreza STI gets a number of upgrades that sets it apart from the standard model just launched around the globe. It features the standard FB20 2.0-liter boxer engine producing 152 horsepower and 145 lb ft of torque, so no upgrades there. Underneath it gets a STI performance muffler, EX manifold, an STI areo body kit, special STI springs and STI drilled rotors on all four corners.

Subaru said they would be bringing out new STI models to their lineup and this is the result of that announcement made last year. These are just concept cars, but it’s a move by Subaru to bring out new performance models that step up the STI presence in the lineup. Hopefully, performance enthusiasts will see these models in Subaru showrooms in the near future.

The new 2017 Subaru Impreza STI would be a model that would compete with the new 2017 Nissan Sentra NISMO, Ford Focus RS with a performance package and the Honda Civic performance model expected in the US. Will it reach production? Stay tuned.