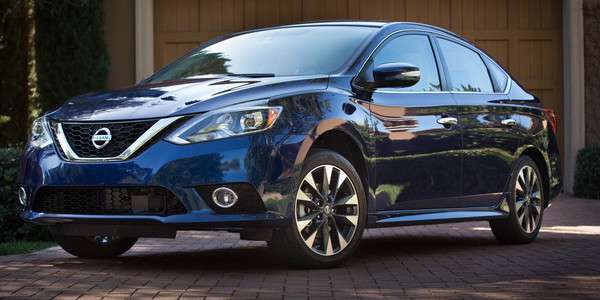 The 2016 Nissan Sentra gets a mid-cycle update with new exterior styling, upgraded technology and new safety features. What about handling?
Advertisement

The compact car segment is ripe with competition and Nissan needed to upgrade the Sentra. They’ve done that with pretty extensive enhancements to the outside and inside. Nissan didn’t touch the powertrain, but they did tweak the suspension. Did Nissan do enough to stay competitive with the leaders like Honda Civic, Subaru Impreza, Ford Focus and Mazda3? This week we test drive the top-of-the-line Nissan Sentra 1.8 SL CVT. We’ll check it out in the tough high-altitude environment of Colorado.

The 2016 Sentra gets a mid-cycle update. Outside the compact sedan gets a new grille that resembles the Altima and Maxima sedans. It also gets new headlamps that copy the Murano. The hood, fenders and fascia are re-sculpted and it gets new chrome trim. Tail lamps and rear fascia get remolded too.

Inside, Sentra gets a new steering wheel, revised dash and a new high-res driver information screen. New safety technologies (automatic emergency braking, a blind-spot monitor with rear cross-traffic alert and NissanConnect emergency telematics) have been added. Infotainment upgrades include the addition of NissanConnect Services, including remote access and satellite radio.

The cabin of the 2016 Sentra is clean and uncluttered. It may not be as refined as others but the interior feels modern and updated with the two-tiered and gently flowing dash that tapers at the sides. The SL gets matte and metallic plastic, blended that makes the cabin feel a bit more upscale. This model gets leather seats that aren’t as comfortable as others in this class. The seats felt firmer than we expected both in front and back.

There’s soft-touch materials throughout the cabin and the quality is good for a compact. We appreciated the easy-to-use controls and simple straight forward design. SL comes with lighted steering wheel controls making it easy to see at night. Extras like heated from seats, rearview camera, a sunroof and heated mirrors add a luxury feel too.

The cabin of the Sentra feels more like a mid-size sedan with it’s abundant headroom and legroom. In the rear, passengers will think they are riding in a bigger vehicle. The rear seat can easily hold two adults or three kids. There’s a hidden armrest/cup holder that folds down for additional comfort in the back. The 60/40 seats fold down for additional storage and opens up to a large truck that can carry two large suitcases. At 15.1 cubic feet, the Sentra's trunk volume is comparable to that of many midsize sedans.

The Sentra is powered by a 1.8-liter four-cylinder engine making 130 horsepower and 128 pound-feet of torque. It remains unchanged in the makeover, and it still comes mated to a continuously variable transmission (CVT) automatic. It sends power to the front wheels. EPA fuel mileage estimates are 29/38 city/highway mpg and 32 combined mpg with the CVT. Nissan says the 2016 Sentra gets new springs and dampers that are stiffened by 10 percent improving handling.

The 2016 Sentra’s ride is relatively smooth and compliant as we found out on the city streets of Denver. It’s also quieter than the outgoing model as it gets additional sound-deadening material in the cabin. You can still hear the 1.8-liter engine working hard when we pushed it hard up the mountain road at altitude. But it is the quietest Sentra ever produced.

There’s sportier handling compacts on the market but the suspension upgrades gives the Sentra a higher rating on the fun-to-drive meter. We thought the 130 horsepower powerplant works hard to get it up to speed. We are testing the car at a mile high in elevation at a minimum, and up to 8500 feet where this writer lives. On the flats, the Sentra has enough power for normal driving that most consumers will find adequate. If you plan on loading up the compact sedan with gear and four people and heading to the mountains regularly, you will need something with more power. For city commutes, the Sentra will do just fine.

We still don’t like CVT automatic transmissions, but Nissan has one of the better ones. It’s ideal for saving fuel and helps get the mileage up. It still revs like a CVT, and makes noise doing so. The automatic transmission can be a bit slow to respond when pushing it hard. Under normal driving, the 130hp 1.8-liter engine coupled to the CVT should be enough.

The Sentra has Eco, Normal and Sport modes that change the character of the car. The buttons are located on the lower left side of the dash and hard to see when you are driving. A better location would be up on the console. What do they do? Sport mode quickens the throttle and transmission response, while Eco cuts down power to the AC. The CVT seemed to behave differently in Eco mode. It felt like it didn’t have to try as hard.

In the mountain corners west of Denver, the Sentra handles with more confidence than the outgoing model. The firmer suspension seems to have improved cornering and handling in the Sentra. The changes have reduced body lean and roll when we took corners at higher speeds. The disc brakes in the rear helped improve stopping performance over the standard drums on lower trims.

One new feature worth mentioning is the Sentra’s new Intelligent Cruise Control. Traditional cruise control systems only maintain a set speed. Sentra’s system also helps keep an adjustable set distance between you and the car in front. As traffic slows down or speeds up, the compact sedan responds accordingly.

With all the compact sedans on the market, each comes with its own strengths and weaknesses. The 2016 Nissan Sentra stands out above the others with its roomy interior and fuel efficiency at 32 combined mpg. It’s a practical car for commuting in urban environments and especially good if you need to transport passengers in the back on a regular basis. It comes with the latest technology to stay connected and gets new safety features to keep you safe.

Tesla Contemplates A New Strategy for China Retail even As Sales Boom
Jay Leno on Elon Musk & EVs: “I Think He Should Get ... Credit"
END_OF_DOCUMENT_TOKEN_TO_BE_REPLACED